Roger Federer to decide on Olympics after Wimbledon

Roger Federer said Saturday that he’ll make a decision on whether to represent Switzerland in the Tokyo Olympics after he completes his run at Wimbledon.

“With the team we decided we’re going to reassess the situation after Wimbledon because … obviously if I play really good here or really bad, I think it has an impact on how everything might look in the summer,” Federer said. “Still my feeling is I would like to go to the Olympics. I would like to play as many tournaments as possible. But I think we decided now let’s just get through Wimbledon, sit down as a team, and then decide where we go from there.”

Federer, 39, withdrew from the French Open earlier this month after three matches, citing health concerns related to his long layoff. 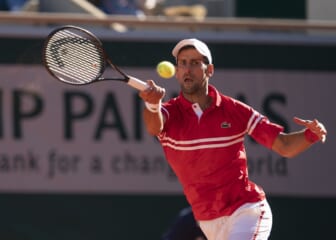 He was appearing in his first major since the 2020 Australian Open. The 20-time Grand Slam winner was sidelined for more than a year following two knee surgeries.

In his only Wimbledon tuneup this year, Federer fell to Felix Auger-Aliassime in the second round of the Noventi Open in Halle, Germany.

An eight-time Wimbledon champ, the sixth-seeded Federer faces Adrian Mannarino of France in the first round on Tuesday. Federer is 6-0 in his career against Mannarino.

Men’s singles play at the Olympics is scheduled to begin July 24.