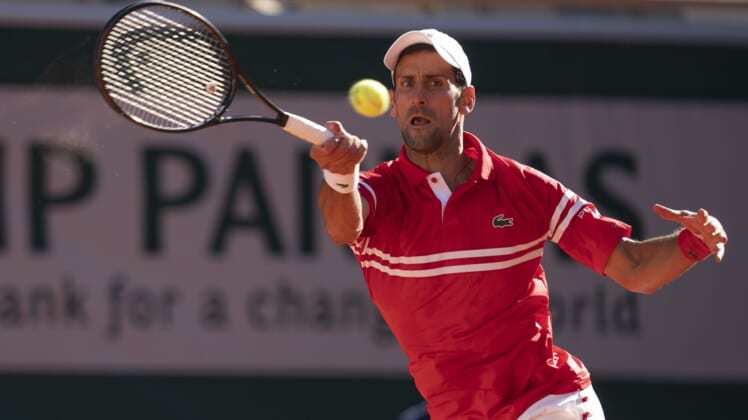 Novak Djokovic said he has no plans to stop after claiming his 19th Grand Slam title at the French Open, and oddsmakers believe he’ll continue his march on history at Wimbledon later this month.

Djokovic, 34, is the consensus favorite two weeks ahead of Wimbledon. He is being offered at +110 by BetMGM and +125 by DraftKings and PointsBet.

The next shortest odds for any other player are +600, being offered to Daniil Medvedev (DraftKings), Stefanos Tsitsipas (DraftKings) and Roger Federer (BetMGM).

Medvedev, the Russian who has yet to win a Grand Slam singles title, is also being offered at +650 by PointsBet and +700 by BetMGM.

If Djokovic is able to claim his sixth Wimbledon title, he will equal the record of 20 Grand Slam singles titles in the Open Era shared by Federer and Rafael Nadal.

“I’m very proud, very happy. I don’t want to stop there,” Djokovic said after rallying from two sets down to defeat Greece’s Tsitsipas on Sunday.

The French Open remains Djokovic’s most challenging Slam, as he now has a pair of titles at Roland Garros. He claimed his ninth Australian Open title earlier this year and will arrive in London as the two-time defending Wimbledon champion (the event was canceled last year due to the coronavirus pandemic).

Federer has won the event eight times, but the 39-year-old is still working his way back from knee surgery and withdrew from the French Open to focus his preparation on Wimbledon. He is being offered at +700 by PointsBet and +800 by DraftKings.

Djokovic on Sunday became the first player in the Open Era to win all four Grand Slams twice. He is also halfway to the calendar year Grand Slam.