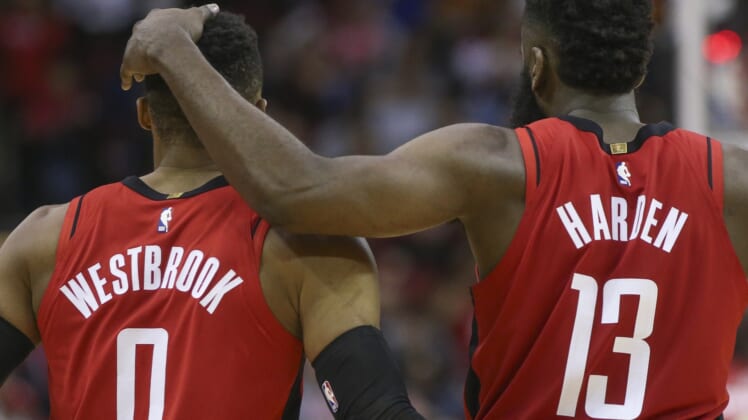 Heading into a busy NBA offseason, with several stars on the trade block, Westbrook is seemingly done with the Rockets after just one season. With rumors flying about where he could be headed and the level of trade interest around the league, another development has added a new wrinkle to this story.

A few days after Stephen A. Smith shared on First Take that Westbrook and James Harden don’t want to play together anymore, Westbrook denied the rumor on Instagram.

However, it seems the relationship between the perennial All-Star guards might be part of the reason for the trade. On ESPN’s 710 AM with Jorge Sedano and LZ Granderson, Ramona Shelbourne shared that, following conversations around the league, Westbrook and Harden didn’t get along.

The partnership between the two ball-dominant guards didn’t work, even with both players posting huge numbers. Westbrook wants out, in part, because he is looking for an opportunity to be the floor general for a team once again.

It’s not the only reason Westbrook wants out. He reportedly isn’t happy with the direction the Rockets are headed. As further detailed by The Athletic, the nine-time All-Star is uneasy about Houston’s lack of accountability and culture.

Harden is seemingly happy with the current situation, committed to staying with the team even after the turnover on the bench and in the front office this offseason. However, Westbrook doesn’t think that there is enough team-wide accountability and structure. Notably, per The Athletic, Westbrook had to be the presence who held Harden accountable last season.

Given Harden has become comfortable operating with a lot of freedom in Houston, there’s no reason for him to leave. Even with the coaching change, it seems unlikely that he would suddenly become the type of player Westbrook wants him to be.

This isn’t to say Westbrook and Harden aren’t close friends. Ultimately, this might just be a situation where the 2017 NBA MVP award recipient feels both are better off playing on different teams.

Of course, trading Westbrook won’t be easy. He is owed more than $130 million over the next three seasons and only a few teams seem willing to take on that deal. Given the limited market, only a few landing spots stand out for a trade.

Teams like the Charlotte Hornets and New York Knicks, both of which expressed interest, would offer that opportunity. Westbrook could be the star at Madison Square Garden, entertaining fans in the Mecca of basketball.

As for Charlotte, it would let Westbrook play for Michael Jordan. The two have a close relationship and both offer what the other is seeking, making it an ideal match.

Other teams will certainly show some interest, but Charlotte and New York seem like the favorites right now. With the NBA’s moratorium set to be lifted in a matter of days and the 2020 NBA Draft closing in, a blockbuster trade could happen. However, given the size of the contract and the required trade package, it will likely take time for a trade to develop.

The 2020-’21 NBA season set to start on Dec. 22, the Rockets have more than a month to try and make something work. If the right deal doesn’t come along, Westbrook will have to put his issues aside and hope a trade comes in 2021. One thing is for certain, there will be a lot more Rockets news coming this season.