Reporter Kelsey Wingert recovering after being struck by liner 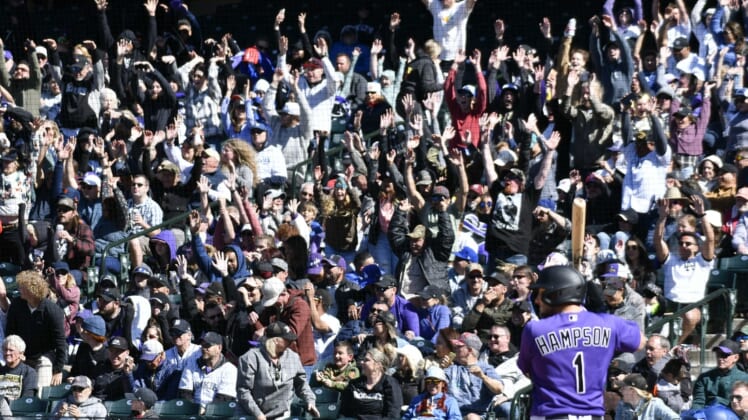 Denver-area AT&T Sportsnet reporter Kelsey Wingert said Wednesday that she is recovering after being struck in the head by a foul line drive during the ninth inning of the Colorado Rockies’ home game on Monday night against the San Francisco Giants.

Wingert, who covers the Rockies, posted a picture on her Twitter account displaying a downward row of stitches on her forehead from the incident, saying “I took a 95 MPH line drive to my head.”

Checking in – Monday, I took a 95 MPH line drive to my head.

The @Rockies & @ATTSportsNetRM have treated me like family. Getting me treatment & to the best hospital ASAP. I was at hospital for 5 hours w/ David Woodman (GM of AT&T SN), his wife, Paula & my producer Alison Vigil. pic.twitter.com/UzhlCzclNE

Wingert, 29, was stationed at the end of the Rockies’ dugout when she was struck by a foul ball hit by San Francisco Giants outfielder Austin Slater. She said she spent five hours at the hospital.

“I had CT scan to check for internal bleeding/fractures & it came back clear, Thank God. I received internal & external stitches,” Wingert said.

This isn’t the first time Wingert has been injured by a foul ball.

On March 30, 2018 while working for Fox Sports South, Wingert suffered a fractured right eye socket when struck by a foul ball during a game between the Atlanta Braves and Philadelphia Phillies.

Wingert, then covering the Braves, was briefly hospitalized after being hit by the foul ball off the bat of Odubel Herrera of the Phillies in the seventh inning. She was standing in the camera well on the first-base side at Atlanta’s SunTrust Park when Herrera’s sharp bouncing grounder hit her in the face.