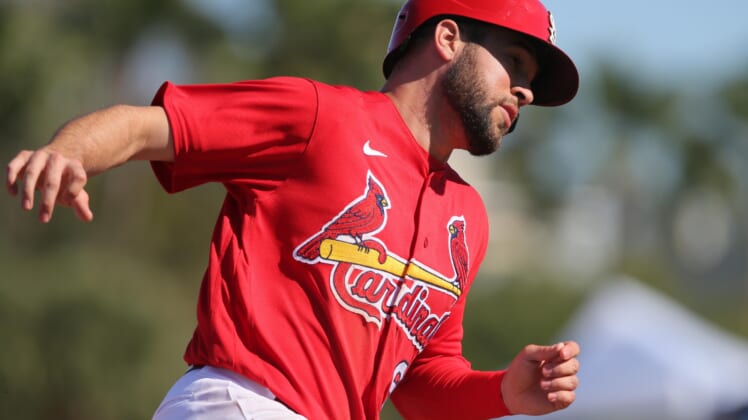 The St. Louis Cardinals, who are in need of reinforcements following their COVID-19 outbreak, are preparing to promote top prospect Dylan Carlson to make his MLB debut.

Carlson, the No. 18 overall prospect in baseball by MLB Pipeline, has spent the early portion of the season at the team’s alternate site. With many of the club’s players now sidelined by the coronavirus, the talented outfielder could soon his a chance to prove himself.

According to The St. Louis Post-Dispatch‘s Derrick Goold, the Cardinals plan to call up Carlson in a series of moves to replenish their roster when they are cleared to return.

The 21-year-old outfielder was selected by St. Louis with the No. 33 overall pick in the 2016 MLB Draft. He steadily climbed through the farm system, before erupting during the 2019 season.

After a strong 2019 campaign, Carlson was invited to spring training 2.0 as a member of the team’s initial player pool. However, he was sent down to the alternate training site before the regular season began.

With the Cardinals now in desperate need of healthy players, especially in the outfield, one of MLB’s top prospects could soon live out his dream. It could be the start of a new era for St. Louis with the switch-hitting outfielder capable of taking a spot in the lineup for years to come.

When will the St. Louis Cardinals play again?

The St. Louis Cardinals haven’t played a game since July 29, the result of a COVID-19 outbreak that has sidelined the team indefinitely. An outbreak that started hours before a contest against the Milwaukee Brewers has led to 15 consecutive games being canceled.

In order to even be cleared to resume workouts, the Cardinals must have consecutive days without any positive COVID-19 tests. They were closing in on reaching that mark late last week, but additional positive tests wiped out a weekend series against the Chicago Cubs. It also led to the suspension of this week’s three-game set against the Pittsburgh Pirates and a doubleheader against the Detroit Tigers.

MORE: What should the St. Louis Cardinals do?

The earliest the Cardinals can return is Friday, when they are scheduled to face the Chicago White Sox. It would be the start of a grueling end to an already difficult season with 55 games in 44 days.

Despite the glaring hurdles facing the Cardinals and the chances the team could suffer another setback or experience injuries, MLB commissioner Rob Manfred is confident the Cardinals will have a credible season.

The Cardinals have now changed their COVID-19 policies, but the road ahead will be challenging with key players sidelined by the coronavirus.