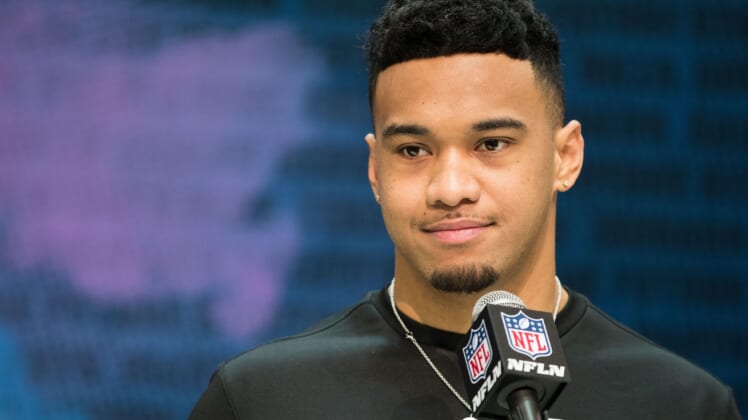 The Miami Dolphins envisioned Tua Tagovailoa as their starting quarterback for nearly a year. After putting themselves in a position to draft the star quarterback in the 2020 NFL Draft, it could now be a matter of time before Miami’s dreams become reality this season.

While Tagovailoa, the No. 5 overall pick, will head into the summer behind Ryan Fitzpatrick on the depth chart, it reportedly might not be for long.

The Dolphins have indicated that Tagovailoa might start the season on the bench until he is ready to start later in the 2020 season. While that might be the organization’s stance now, multiple NFL coaches told Bleacher Report’s Mike Freeman that Tagovailoa starting in Week 1 is a foregone conclusion.

It would be quite the accomplishment for the rookie. While top picks typically start immediately in their first season, this is not a normal offseason of training for Tagovailoa or the NFL. The 22-year-old is still completing his recovery from hip surgery and NFL minicamps could be delayed due to the COVID-19 pandemic.

Fitzpatrick will also provide legitimate competition and has another advantage over the rookie. Not only is the NFL veteran coming off a season with 20 passing touchdowns and an 85.5 quarterback rating, he also has familiarity with offensive coordinator Chan Gailey’s system.

Despite a delayed training program and fewer practices, NFL coaches still believe Tagovailoa will win the job. In fact, many indicated he could quickly become the best player from the 2020 draft class. There’s a reason the Dolphins loved Tagovailoa long before they picked him and he’ll have an opportunity to prove them right early on this season.