Erik Jones is the leading candidate to take over the No. 43 at Richard Petty Motorsports. Here is what it means for both sides involved. 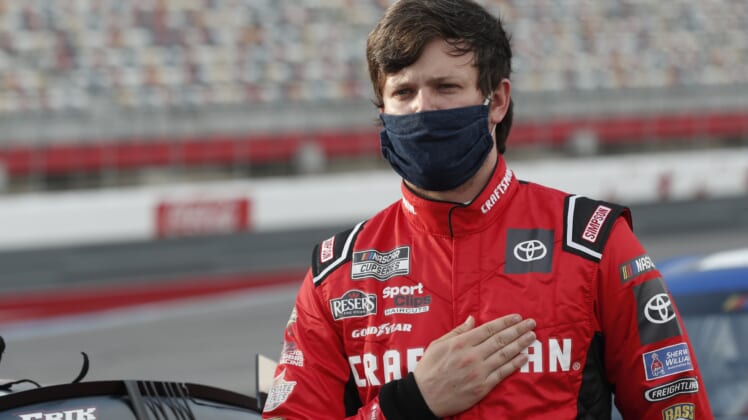 After most likely missing out on a ride with Hendrick Motorsports and Joe Gibbs Racing, Erik Jones might find himself replacing Bubba Wallace in the No. 43 at Richard Petty Motorsports.

According to The Athletic’s Jordan Bianchi, Erik Jones is considered the leading candidate to take over the vacancy at Richard Petty Motorsports in 2021.

This season, Jones has nine top-five and 13 top-10 finishes with an average finishing position of 15.9.

What does this mean for Erik Jones?

After being a hot prospect for Joe Gibbs Racing and Toyota, Erik Jones finds himself on the outside looking in for many top-tier rides for the 2021 season. Jones has been blazing hot in the playoffs this year with four top-five finishes in nine races. However, that has not been enough to land him a ride such as Hendrick Motorsports or retaining his current ride at Joe Gibbs Racing.

Jones has struggled to find a ride due to sponsorship concerns. With sponsorship being more important as ever, teams are searching for drivers that can bring stability to them. While it’s not a knock on Jones, many good drivers have struggled with sponsorship. Alex Bowman was struggling with sponsorship until it was announced he would move to the No. 48 car in 2021.

Jones will eventually find his way back up the ladder in NASCAR. However, if he were to land the No. 43, it would be a significant step down for the 24-year-old out of Byron, Michigan.

What does this mean for Richard Petty Motorsports?

After it was announced that Bubba Wallace would be taking his talents to a newly–formed race team with Denny Hamlin and Michael Jordan, Richard Petty Motorsports started their search for a new driver. There were rumors of Daniel Suarez or Ty Dillon landing the ride, however, Suarez landed with Trackhouse Racing Team and Dillon still searches for a ride.

Wallace has many sponsors that he can take with him to his new team. With sponsorship a concern for Richard Petty Motorsports, many thought they could hire someone to help with that situation. Jones doesn’t bring many sponsors with him, but he brings potential that not many drivers have.

I noted in a previous article that Jones and JTG Daugherty Racing would be the perfect fit for both sides. However, hiring a driver of Erik Jones’ caliber would be huge for Richard Petty Motorsports. They have struggled to compete for wins outside of the superspeedway races. Maybe, this move would help bring the No. 43 back to victory lane for the first time since 2014.

It may not be the best fit for Erik Jones, but it may be one of the only opportunities that he has left. JTG Daugherty Racing could keep Ryan Preece beyond 2020 or downsize to a one car team that has been previously rumored.

On the other hand, this could be a dream come true for Richard Petty Motorsports. After losing Bubba Wallace, they may have thought they wouldn’t land the type of driver that Bubba Wallace has been for them. However, Jones is an established NASCAR Cup Series winner and has statistically been the best driver in the playoffs thus far.

If Jones and Richard Petty Motorsports can complete this deal, it will be an important opportunity for both sides to take advantage of it. Jones needs to climb back up the ladder toward another top-tier ride. On the other hand, Richard Petty Motorsports needs to find victory lane again. Time will tell whether this could be a successful relationship, but both sides should be eager to get this done.