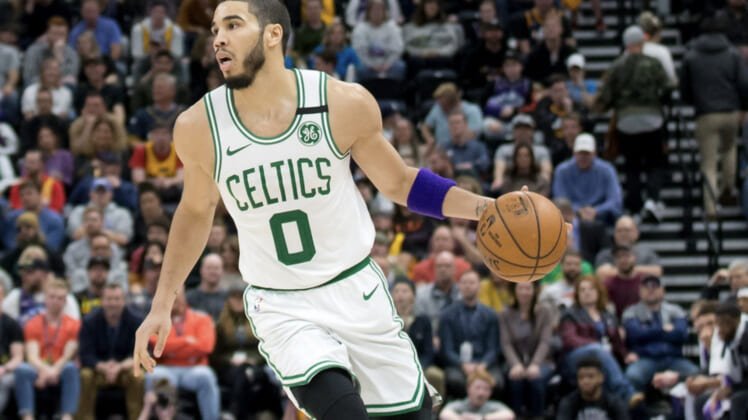 Star forward Jayson Tatum is one of the primary reasons that the Boston Celtics have to be seen as top-end title contenders once the 2019-20 NBA season ultimately resumes.

Tatum, 22, was in the midst of a breakout third season when the campaign was suspended back in on March 11 due to the global pandemic. The former No. 3 overall pick is averaging 23.6 points and 7.1 rebounds on 40% shooting from distance.

This could very well lead to Tatum receiving a max contract from Boston once the season concludes.

“If Jayson Tatum is the superstar that they envisioned when they began this whole rebuilding process when they traded Kevin Garnett and Paul Pierce for all of those draft picks hoping to land a player like this, we could see ‘Glory Days’ for the Celtics again,” ESPN’s Brian Windhorst reported. “But it’s very much up in the air, and I’m gonna tell ya, they’re gonna have to pay him like it because after this season ends, he is going to get most likely a max contract. They’re going to bet that he becomes that player.”

There’s definitely a potential complication here. That includes the high probability that the 2020-21 salary cap will be lowered due to the lack of revenue stemming from the ongoing pandemic-related work stoppage and the fact that the remainder of the season will be played without fans in attendance.

Max contracts of this ilk call for a player to receive 25% of the team’s salary cap. The cap projection for next season is a mere $115 million.

As for the Celtics, this comes on the heels of the team signing fellow young star Jaylen Brown to a four-year, $107 million extension last summer.

Tatum and Brown are the centerpieces for Boston moving forward, as evidenced by the fact that general manager Danny Ainge pushed back against including either player in failed trade attempts for Anthony Davis and Kawhi Leonard in the past. That seems to suggest a Tatum deal will be worked out in short order once the season concludes.