Report: 49ers inform Chip Kelly he has been fired 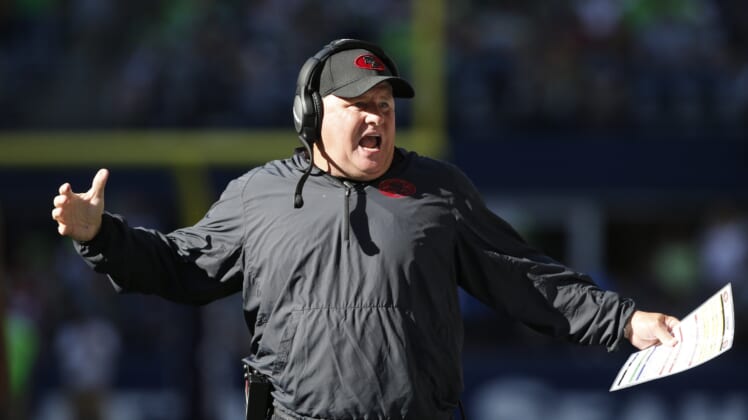 After the San Francisco 49ers lost by two points to the Seattle Seahawks in Week 17, the franchise reportedly fired head coach Chip Kelly.

49ers officially have informed Chip Kelly he no longer is their coach, per source.

This came just hours after Trent Baalke told reporters the franchise had fired him, confirming rumors that had been swirling for months. These apparently aren’t the only moves being made by the 49ers’ brass, either.

49ers scout tells me nearly the entire department is looking for new jobs. A new GM may keep some around, but others actively want to leave

San Francisco has collapsed the past three years. Starting with an 8-8 2014 season that led to Jim Harbaugh leaving for Michigan to a five-win campaign under Jim Tomsula to Chip Kelly’s 2-14 debacle this year, it’s safe to say a change is needed.

What remains to be seen is exactly what the change will look like. Perhaps the 49ers will finally bring Mike Shanahan back after so many years to lead the organization — something that was reportedly an option last year. Baalke reportedly vetoed that move at the last minute last year, so it wouldn’t be surprising whatsoever for the 49ers to go down that road again, with perhaps Kyle Shanahan as the team’s head coach.

The 49ers must also decide if Colin Kaepernick is going to be a part of the team’s future. He redid his contract this year, and the 49ers can cut ties without any penalties at this point. With the No. 2 pick in the 2017 NFL Draft, the franchise will have some options there to perhaps draft a rookie in Round 1.

Whoever does come on board next year has quite a mess to clean up, to be sure.