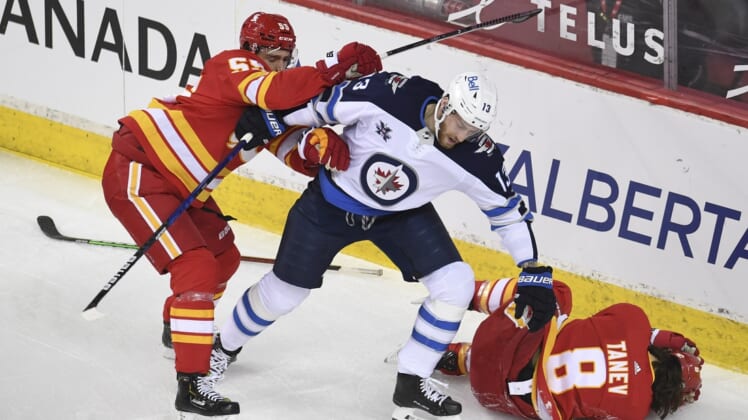 Mark Scheifele scored twice and added an assist while Nikolaj Ehlers equaled his career high with three assists to lead the visiting Winnipeg Jets to a 5-1 victory over the Calgary Flames on Monday.

Nate Thompson, Andrew Copp and Pierre-Luc Dubois also scored for the Jets, who received a 29-save performance from goaltender Connor Hellebuyck for their fourth win in five games.

Winnipeg also moved to within one point of the Toronto Maple Leafs for the top spot in the North Division.

Elias Lindholm scored for the Flames, while starting goalie Jacob Markstrom stopped 19 shots before being pulled after two periods. David Rittich made five saves in the final frame of Calgary’s fifth loss in six outings.

After Lindholm opened the scoring with a power-play goal just 144 seconds into the affair, which finished a highlight-reel worthy passing play, the Jets ran away with five unanswered goals.

Thompson’s disputed goal late in the first period sent the Jets on their way. As Dylan DeMelo’s point shot headed to the net, Thompson lifted his foot to redirect the puck, and it went into the net with 3:41 remaining in the first period. Following a lengthy review, it was ruled not to be a kicking motion.

Scheifele, who went into the night with only two goals in the previous 16 games, netted his first of the night with 1:47 left in the first when he finished a two-on-one rush with a one-timer of Kyle Connor’s cross-ice feed.

Scheifele potted his second of the game to double the Winnipeg edge. After his first shot was denied, Scheifele had the presence to slap the rebound and buried the chance for his 15th goal of the season at the 3:31 mark of the second period.

Although the Flames controlled the bulk of the play in the middle frame, Copp extended the lead late in the second period when he drove to the net and redirected a pass from Ehlers.

Calgary’s goalie change did nothing beyond giving a rest to Markstrom, who has struggled since returning from injury on March 6.

Dubois scored 64 seconds into the third period when he ripped a wrist shot from the top of the left circle to round out the scoring and complete Winnipeg’s fifth victory in eight meetings between the teams this season.