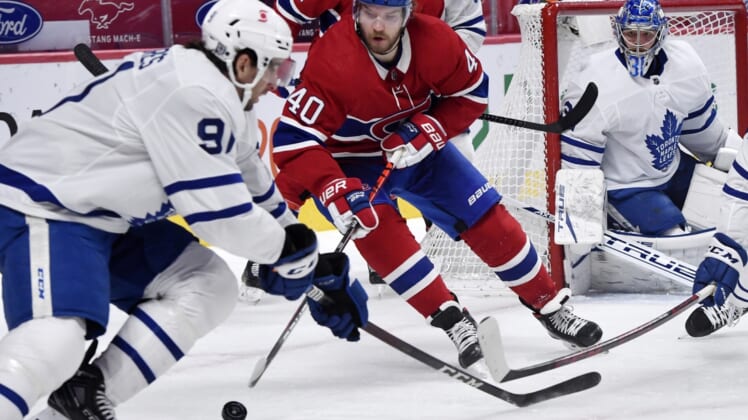 Jake Muzzin had three assists and Frederik Andersen had 33 saves as the visiting Toronto Maple Leafs recorded a 4-2 victory over the Montreal Canadiens on Wednesday.

The win extended Toronto’s lead in the North Division to five points over second-place Montreal. The red-hot Maple Leafs have an 8-0-1 record over their last nine games.

Muzzin’s three points matched a single-game personal best for the veteran defenseman. It was also the first three-assist game of his 10-year NHL career.

Zach Hyman had a goal and an assist and John Tavares had two assists for Toronto.

Travis Dermott, Justin Holl and Ilya Mikheyev all scored their first goals of the season during a seven-minute, 14-second stretch bridging the second and third periods.

Tomas Tatar and Josh Anderson scored for the Canadiens, with Anderson putting Montreal ahead just 1:16 into the opening period. Anderson has scored in four consecutive games.

The Canadiens outshot the Leafs by a 35-24 margin. Only 12 of those Toronto shots came in the first two periods, as Montreal used some disruptive backchecking and neutral-zone play to largely control the high-scoring Maple Leafs.

The Maple Leafs finally found a goal from an unlikely source in Dermott, who hadn’t scored in his previous 36 regular-season games dating back to Jan. 2, 2020. The defenseman worked his way into the circle and fired a shot through traffic at 15:18 of the second period.

Dermott was back in the lineup after missing the previous two games with a leg injury.

The equalizing goal seemed to spark the Leafs, as Holl and Mikheyev each scored within the first three minutes of the third period.

Holl blasted a big shot from the slot that beat Carey Price at the 1:50 mark. Just 42 seconds later, Mikheyev extended Toronto’s newly-established lead by finishing off a pass play with Hyman and Alex Kerfoot.

Andersen stopped 33 of 35 shots for his league-best ninth victory of the season. The Toronto goalie has a .958 save percentage over his last three games.

The Maple Leafs and Canadiens play again on Saturday in Toronto. Before that rematch, the Canadiens will host the Edmonton Oilers on Thursday.