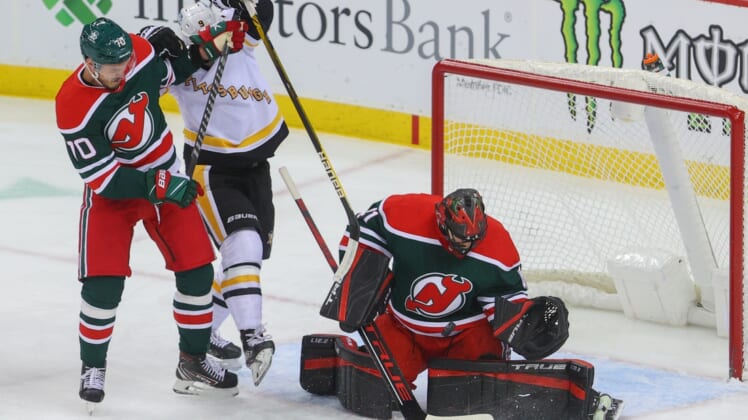 Jake Guentzel had a goal and an assist Saturday as the visiting Pittsburgh Penguins topped the New Jersey Devils 3-1 in Newark, N.J.

Pittsburgh, which spotted New Jersey a one-goal lead, had lost two straight and avoided its first three-game skid of the season.

The Devils had won two straight and were looking for their first three-game winning streak. Instead, they picked up their 10th loss in 13 games.

The teams split games Thursday and Saturday and will meet for the third straight time, and the third time in four days, Sunday in Pittsburgh.

Zach Aston-Reese and Bryan Rust also scored for the Penguins, and Sidney Crosby had two assists. Goaltender Casey DeSmith, who has allowed two goals or less in each of his past five starts, made 24 saves.

Kyle Palmieri scored for New Jersey. Scott Wedgewood made 26 saves after stopping 40 shots Thursday. He made his second straight start after Mackenzie Blackwood got hurt during Thursday’s pregame warmup.

The Penguins played without winger Brandon Tanev, who participated in the pregame warmup but did not return for the game because of an unspecified injury.

New Jersey got the only goal of the first period. Off a rush that streamed into a four-on-two, DeSmith made a sliding save while doing the splits on Sami Vananen, but Palmieri scored on the rebound for a 1-0 lead at 7:19.

Aston-Reese tied it at 4:59 of the second. He and Sam Lafferty were practically huddled together protecting the puck heading down the slot before Aston-Reese swatted it under Wedgewood’s pads.

On a power play 1:36 later, Pittsburgh took a 2-1 lead. Rust came out of a cluster of players battling for the puck along the right-wing boards. He moved down the inside edge of the near circle, went forehand to backhand and chipped the puck over Wedgewood’s blocker.

After Crosby’s hustle to keep the puck in the New Jersey zone at the left point, Guentzel deflected Crosby’s shot past Wedgewood at 14:25 of the third to make it 3-1.