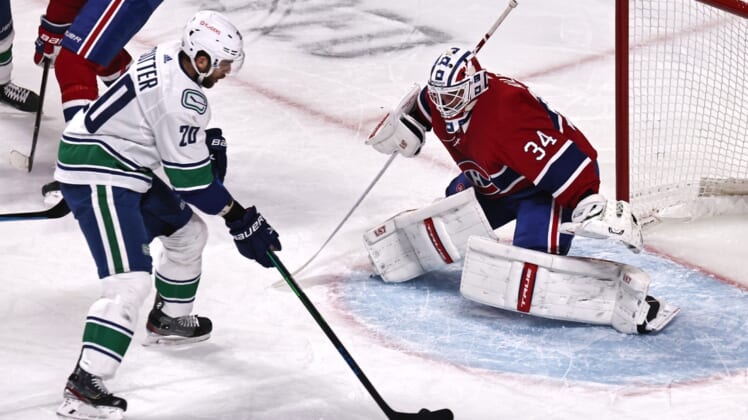 J.T. Miller scored in overtime to give the Vancouver Canucks a 3-2 road win over the Montreal Canadiens on Friday.

After Josh Anderson missed the net on a breakaway chance, the Canucks quickly worked the puck back up to Miller. The forward made an outstanding move to work his way past two Montreal players and score the deciding goal.

It was Miller’s ninth goal of the season, coming in his 100th game in a Canucks uniform.

The Canucks have won four games in a row, with their last three victories all coming beyond regulation time. Vancouver is 7-1-0 over its last eight games.

Montreal is 1-2-2 in its last five games, losing in overtime for the second consecutive game. The extra period hasn’t been kind to the Habs, who are 0-9 in games decided in overtime and shootouts this season.

Adam Gaudette and Nils Hoglander each scored for the Canucks.

Suzuki scored the equalizer with just 57 seconds left in regulation. After Tyler Motte drew a delay-of-game penalty, Suzuki won the faceoff in Vancouver’s end and immediately blasted in a wrist shot from the edge of the circle.

Thatcher Demko continued his red-hot play by stopping 29 of 31 shots. Demko is 8-1-0 with a .949 save percentage over his last nine games.

Perry opened the scoring 4:15 into the game. Petry’s initial shot hit the crossbar, and Perry was in position to deposit the rebound for his sixth goal of the season.

The Canucks equalized 2:25 into the second period. From a seemingly awkward angle near the boards, Antoine Roussel sent a perfect pass to Gaudette’s stick for the tip-in goal.

Just over four minutes later, Hoglander put another re-direction past Allen to put Vancouver ahead. It was Hoglander’s sixth goal of his rookie season.

The Canucks and Canadiens meet for the ninth and final time of the regular season Saturday in Montreal. The Canadiens have a 5-0-3 lead in the season series.