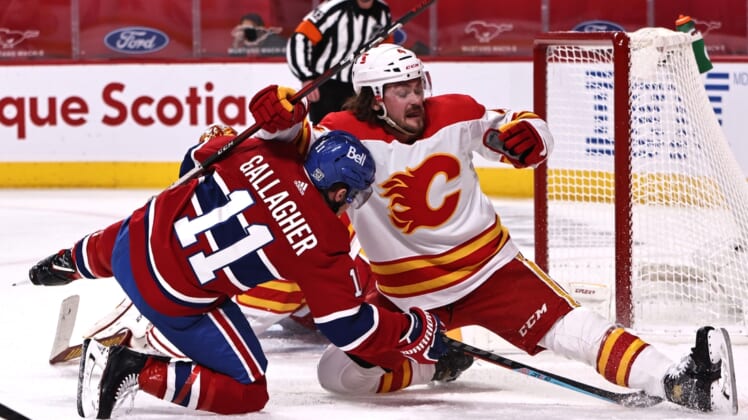 Jacob Markstrom made 37 saves for the shutout and the Calgary Flames snapped a three-game losing streak with a 2-0 road victory over the Montreal Canadiens on Saturday night.

Johnny Gaudreau and Mikael Backlund provided the offense in the game that handed Montreal its first regulation-time defeat of the season.

Markstrom was outstanding in recording his second shutout of the season, and his teammates provided just enough offensive support.

After dropping a 4-2 game in Montreal on Thursday and then holding a players meeting, the Flames were looking for a better start and more emotion in their game. They were rewarded early when Gaudreau opened the scoring with a power-play goal.

Upon receiving the puck deep in the right circle, Gaudreau unloaded a top-shelf, short-side offering at the 3:34 mark for his fifth goal of the season and extend his point-scoring streak to start the season to seven games.

Backlund netted an empty net goal with 31.5 seconds remaining, a tap-in goal from deep in the offensive zone.

Elias Lindholm collected a pair of assists in the win, which came in captain Mark Giordano’s 900th regular season game.

In between his team’s goals, Markstrom shone brightly. He made a handful of big stops on Brendan Gallagher, including a clutch save late in the third period when it was a one-goal game.

Markstrom also had puck luck when Montreal’s Shea Weber blasted a power-play point shot off the crossbar — which actually left a mark on the iron.

Dillon Dube returned to the Flames after missing three games due to injury and promptly found himself in hot water after he delivered a high hit on Jesperi Kotkaniemi. No penalty was called, but it appeared his hands went into Kotkaniemi’s face. Fortunately, Kotkaniemi didn’t leave the game.

Goaltender Jake Allen stopped 31 shots in a strong performance, keeping his team in the game until the empty netter. The loss was a double disappointment for the Canadiens too, as forward Josh Anderson left the game after one shift early in the second period and didn’t return.