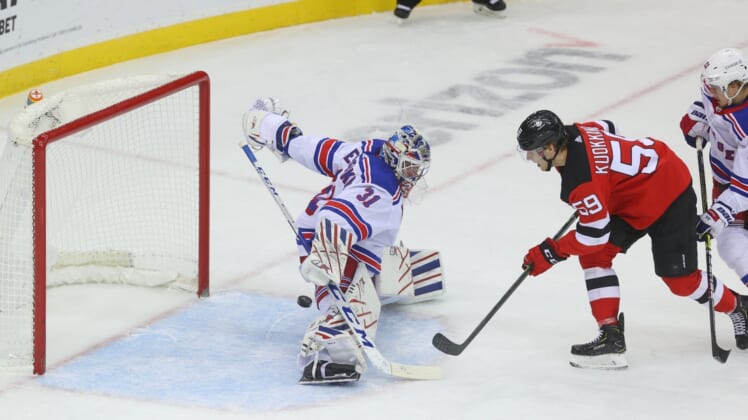 The Rangers won for the fifth time in seven games and beat the Devils for the first time in three meetings thanks to Kreider, whose fourth career hat trick gave him nine of his team-leading 13 goals in the past six games.

After the Rangers trailed 1-0, Kreider struck on the power play after New York easily pushed the puck up the ice from the defensive zone. He finished off the play by parking himself at the right doorstop, getting by Nathan Bastian and tucking in Ryan Strome’s cross-ice pass under MacKenzie Blackwood at 8:28 of the second.

Kreider’s second goal occurred nearly 5 1/2 minutes later when he deflected defenseman Ryan Lindgren’s pass from the right wing off New Jersey defenseman Damon Severson and over Blackwood. He got his second hat trick of the season 23 seconds into the third by burying a wrist shot from the middle of the slot.

Jack Hughes scored for the Devils, who lost their fourth straight and eighth straight at home. New Jersey took its most lopsided loss of the season and dropped 2-7-0 in its past nine games since a 5-2 win at Madison Square Garden on Feb. 16.

Rangers goaltender Igor Shesterkin made 32 saves before getting hurt in the third on a collision with Severson. With 5:52 remaining, Shesterkin was shaken up after sprawling through the crease, could not put any weight on his right leg and was helped back to the locker room after staying down on the ice for a few minutes.

Before exiting, Shesterkin made 13 saves in the first period and shortly before Kreider’s first goal, he denied Miles Wood on an odd-man rush.

Alexandar Georgiev finished off the game and stopped three shots.

Blackwood allowed four goals on 15 shots before getting pulled for Aaron Dell after Buchnevich finished off a give-and-go with rookie Alexis Lafreniere 3:57 into the third. Dell made four saves.