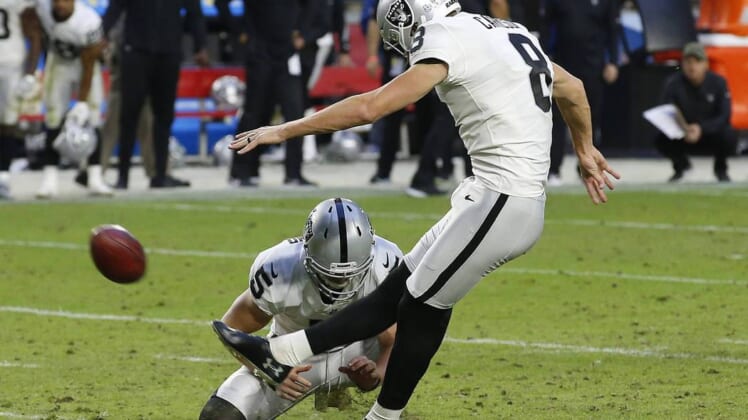 While much of Raider Nation has accepted the non-post season fate of this year’s Raiders team, the team showed some fight on the road against Arizona to capture their second win of the season.

The Oakland Raiders returned to the win column for just the second time in 2018 with an exciting and come-from-behind 23-21 win over the Arizona Cardinals in Glendale, Arizona today.

In a year that hasn’t seen much heroics for the Raiders, unlikely candidates stepped up to be the heroes of the day including a rookie off the practice squad who made the crucial play of the game to set up the game-winning 35-yard field goal from Daniel Carlson as time expired.

With the Raiders trailing the Cardinals 21-20 late in the fourth, quarterback Derek Carr hit Marcell Ateman for an over-the-shoulder 32-yard strike setting the Raiders up in good field position. After a short pass to Seth Roberts, that the wideout turned into a 20-yard gain, Carlson jogged onto the field to hit the game-winning boot.

“Ateman set us up for victory,” Gruden said. “He waited all this time to play. We had nowhere else to go. He went up and made a big play…I”m happy for him.”

Ateman was called into duty after veteran Brandon LaFell injured his Achilles tendon. Gruden said the injury was “bad” and lamented his loss due to his increased usage and production for Carr and the Raiders.

“He did his job and made a heck of a catch,” Carr said of Ateman’s long grab. “He kept his feet in and for him to do that in his first start, first game, and everything going against him, he didn’t get to run the two-minute drill, he didn’t get his red zone reps live. All of these things that would mess with a rookies head didn’t affect him.”

Rookie Marcell Ateman was the surprise hero as the Raiders win their second game of 2018. Getty Images

Ateman’s emergence – albeit in one game – is big for the Raiders who are now almost completely bare at the position.

“It’s almost tragic what’s happened to our receiving corps here,” Gruden added. “But we’ll have to do everything we can to see who’s available and what contingency plan we need to put into place.”

The Raiders were also aided in Arizona by a surprisingly strong running game. Jelan Richard led the silver and black with 61 yards on 11 carries, Doug Martin gained 52 yards, and DeAndre Washington finished the game with another 39 yards in the win. Martin, who injured his ankle late in the first half, didn’t return.

“You look up to the sky and say ‘when’s it gonna end,'” Gruden said of the Raiders massive injuries this season. “But we had so many guys step up today from Marcell Ateman to DeAndre, David Sharpe came in and played some critical snaps for us. It’s a great win for us but we’ve got a long way to go.”

Gruden also was involved in a heated exchange with Carr on the sidelines that was caught on video and created a stir amongst fans and media. It’s the first time such an exchange was visible to the public but the coach said it’s nothing new and not a big deal.

“That’s the first time you’ve seen it,” Gruden barked back when asked at the postgame press conference about the argument. “It’s not the first time it’s happened. We’re both competitors.”

Carr echoed Gruden’s point saying it’s nothing new and laughed off the question about the visible altercation.

While many observers and fans would rather have the Raiders secure the first pick in the 2019 draft by losing the rest of the way, this comeback win by a team in need of good news and positive morale got just what it needed.