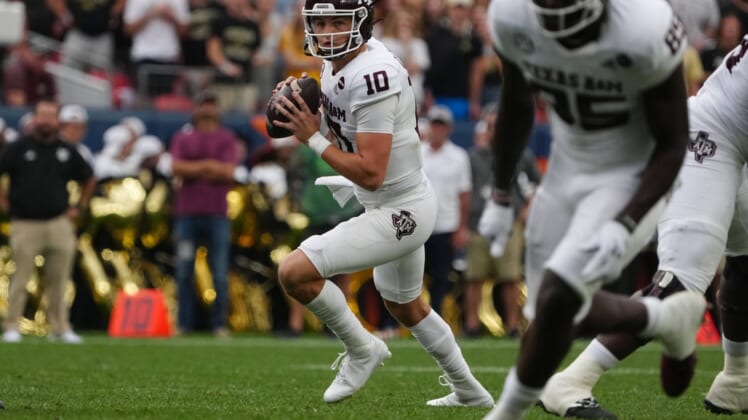 Backup quarterback Zach Calzada threw a go-ahead TD pass to Isaiah Spiller with 2:41 left, and the fifth-ranked Texas A&M Aggies rallied to beat the Colorado Buffaloes 10-7 in Denver on Saturday.

Calzada came on for injured starter Haynes King in the first quarter and finished 18-for-38 passing for 183 yards and the score. Spiller had six catches for 56 yards for Texas A&M (2-0).

Colorado’s Jarek Broussard rushed for 51 yards and a touchdown and quarterback Brendon Lewis was 13-for-25 passing for 89 yards and an interception. He also rushed for 76 yards for the Buffaloes (1-1).

King was injured at the end of the Aggies’ second drive of the day. He was tackled on a third-and-4 scramble and appeared to have his right leg contorted as he went down. The freshman hobbled off the field and then limped to the locker room.

King was 1-for-2 passing for eight yards.

Texas A&M settled for a 53-yard field goal attempt that was wide and kept the game scoreless.

The Aggies appeared to have taken the lead midway through the fourth. Calzada scrambled from Colorado’s 13-yard line and was hit at the end zone as he extended his arm over the goal line. A review ruled Calzada had fumbled and the Buffaloes recovered in the end zone.

Texas A&M forced a punt and drove 77 yards in 11 plays, capped by Calzada’s scoring strike to Spiller on third and 9.

Colorado took the lead in the first quarter. Taking over on their 31, the Buffaloes used nine plays to drive down the field. Lewis broke off a 30-yard scramble that gave them a first down at the Texas A&M 19, and four plays later, Broussard scored on a 2-yard run to make it 7-0.

Colorado had chances to score on its next two possessions but Cole Becker missed a 46-yard field goal attempt and Lewis was tackled at the Aggies 5-yard line on a fourth and 1.

Texas A&M finally got on the board with Seth Small’s 41-yard field goal with 25 seconds left in the first half.