PREVIEW: Philadelphia 76ers look to bounce back in Game 2 vs. surprising Atlanta Hawks 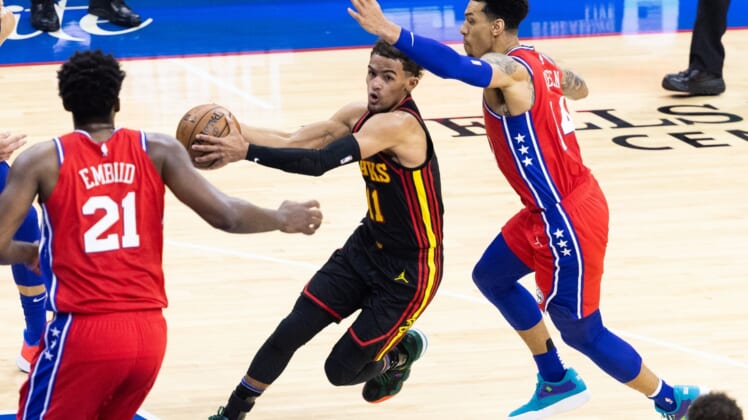 It didn’t take long for the Atlanta Hawks to show themselves as more than foils for the top-seeded Philadelphia 76ers in the NBA Eastern Conference semifinals.

The fifth-seeded Hawks will try to take command of the series Tuesday night when they visit the Sixers for Game 2.

Trae Young was the undisputed leader Sunday in Atlanta’s 128-124 Game 1 victory when he became the first player in franchise history to post at least 35 points and 10 assists in a playoff game.

Young is averaging 30.2 points and 9.8 assists in the first run through the playoffs in his three-year career.

“The confidence in all these guys is high,” Young said. “We’re out here playing for each other. Out here having fun. Everyone’s locked in.”

Bogdan Bogdanovic and John Collins scored 21 points each, Kevin Huerter added 15 and Clint Capela had 11 points and 10 rebounds. The Hawks won without De’Andre Hunter, who sat out with right knee soreness. Hunter is questionable for Game 2.

The Hawks hit 20 shots from beyond the 3-point arc, led by as many as 26 in the second quarter and held on for the victory.

It was hardly a fluke.

“I think it’s a good thing that we’re actually getting to play on TV,” Young said. “People are getting a chance to see what this team is really about. We’ve got a lot of guys on this team who can play.”

The Hawks were 14-20 when coach Lloyd Pierce was fired and Nate McMillan took over on an interim basis. Including the playoffs, the Hawks are 32-12 since then.

“We came in believing in ourselves,” McMillan said.

After dispatching the Washington Wizards in five games, the Sixers entered this series with the understanding that Most Valuable Player candidate Joel Embiid would be playing with a small lateral meniscus tear in his right knee.

Embiid was fantastic with 39 points, nine rebounds and three blocked shots. After all the pounding on his knee, the Sixers find themselves down in the series.

“Obviously, the pain is going to be there,” Embiid said. “That’s normal. But it’s all about managing it, doing whatever it takes to win. Because my goal is to win the championship. I’m going to put my body on the line to make sure that happens. I’m going to give everything I got.”

The Sixers have characterized Embiid as day-to-day throughout the remainder of the playoffs.

Seth Curry scored 21 points and Tobias Harris added 20 points and 10 rebounds. Ben Simmons had 17 points and 10 assists but missed seven of 10 free throws. Simmons’ inability to knock down free throws has been a major issue through the postseason.

If the Sixers are unable to regroup, it will be even tougher to reach the Eastern Conference Finals for the first time since 2001.

“I think we waited too long,” Simmons said. “They hit us first. We didn’t hit back.”

With a 32-8 home record this season, the Sixers can be expected to hit first or hit back in Game 2.