Two teams that were supposed to be home watching a Brooklyn-Philadelphia showdown in the Eastern Conference finals will begin a duel of their own when the fifth-seeded Atlanta Hawks visit the third-seeded Milwaukee Bucks for Game 1 on Wednesday night.

The best-of-seven series that will determine the East’s representative in the NBA Finals pits franchises that have split four all-time playoff series, with none occurring past the first round or since 2010. Each has won twice.

Both clubs needed a Game 7 win on the road against one of the East’s top two seeds to reach this point.

The Bucks were the first to punch their ticket, riding Giannis Antetokounmpo’s 40-point night to a 115-111 overtime victory in Brooklyn over the second-seeded Nets on Saturday. 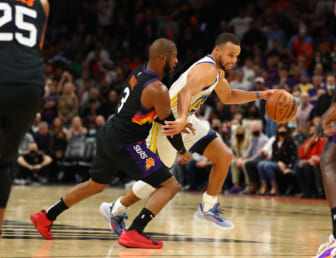 One night later, the Hawks rode the surprising 27-point contribution of Kevin Huerter to a 103-96 road win over the top-seeded 76ers.

So, instead of the conversation focusing on superstar injuries and poor foul shooters, the Hawks and Bucks each will continue pursuit of a second-ever NBA title in franchise history in a rivalry that has been tilted big-time in Milwaukee’s favor over the past four seasons.

With Antetokounmpo recording a pair of double-doubles and Trae Young sitting out twice with injuries, the Bucks won two of three from the Hawks in the regular season for Milwaukee’s fourth straight season-series win. The Bucks have won 11 of 13 over that stretch.

Each has suffered a significant injury in the meantime. The Bucks will be without Donte DiVincenzo (left ankle surgery) in the series, while the Hawks have lost De’Andre Hunter (meniscus surgery in right knee) for the season as they await the possible return of Cam Reddish (sore right Achilles).

Down a man and possibly two, Young said he is encouraging Huerter, who had a 20-point game when the Hawks beat the Bucks 111-104 in Atlanta in their most recent meeting in April, to continue to take a leading role.

“We are definitely telling him to be more aggressive and score the ball a little bit more,” Young said. “Play free, relax, and just have fun.”

The spotlight will shine on Antetokounmpo and Young, and each has responded well to it so far in the postseason.

Antetokounmpo was second to the Nets’ Kevin Durant (248) among all second-round participants with 223 points despite shooting just 8-for-31 (25.8 percent) on 3-pointers. His 90 rebounds were tops among the NBA’s eight quarterfinalists.

Meanwhile, Young ranked fifth in scoring with 203 points, with similar amounts coming on free throws (59), two-point shots (84) and 3-point attempts (60). He led Round 2 in assists with 76 and was third in steals with 12.

The Bucks have had one more day of rest than the Hawks entering the series. Antetokounmpo said he hopes it has given his teammates a chance to forget the past and focus on the Hawks.

“The job is not done,” he insisted. “So that’s the message here. We didn’t win the championship. But this is a great step for our organization.”

The Bucks haven’t made the NBA Finals since losing to the Boston Celtics in 1974, three years after they’d won their only title by beating the Baltimore Bullets.

The Hawks have never advanced past the Eastern finals since moving from St. Louis to Atlanta in 1968. The St. Louis Hawks made the NBA Finals four times in five seasons between 1957-61, facing the Celtics on each occasion and winning once, in 1958.