Trae Young memorably put his finger to his lips to hush the crowd at Madison Square Garden on Sunday after delivering a silencer of a go-ahead basket with 0.9 seconds remaining of the fourth quarter.

Young is back on Broadway for an encore on Wednesday when the Atlanta Hawks visit the New York Knicks for Game 2 of their Eastern Conference first-round series.

The third-year guard gleefully quieted the salty crowd on Sunday by recording 32 points, 10 assists and seven rebounds in the Hawks’ 107-105 victory.

“Game 2, as I’ve said to our guys, is going to be even crazier. The intensity is going to go up a lot. We have to be ready for that,” Atlanta coach Nate McMillan said. “I didn’t know if I was really hearing what they were saying. I hadn’t heard that in an arena before, not from the whole building.

“I thought Trae did a good job of blocking out the noise, which you have to do. … It didn’t seem like it impacted him at all. He was able to stay focused on what he had to do out there on the floor and able to get a win.”

Young scored 13 points during the fourth quarter to highlight the Hawks’ spirited surge. 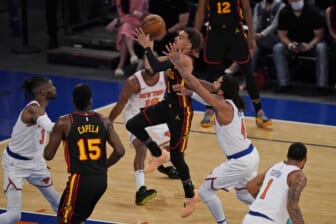 Atlanta made 5-of-7 shots from 3-point range in the final quarter, with Bogdan Bogdanovic making 3-of-4 from beyond the arc. Bogdanovic drained a critical 3-pointer with 55 seconds remaining to forge a tie at 103.

“That fourth quarter, the scoring, the lead went back and forth and I thought our guys did a good job of just staying with it on both ends of the floor, not really showing a panic or anything like that,” McMillan said. “I thought they showed poise and control and did a good job of finishing that fourth quarter. … I have seen, or continue to see, growth in this team.”

Young was the talk of the town after his postseason debut. New York’s Julius Randle found himself on the defensive after his performance on the grand stage.

“I’m not making no excuses,” Randle said. “I’ve got to be better, and I will be better. I’ll just leave it at that.”

RJ Barrett wasn’t much better following a 6-of-15 performance for 14 points.

Alec Burks, however, scored 18 of his team-leading 27 points in the fourth quarter.

New York could be tasked with shuffling its lineup after center Nerlens Noel sustained an ankle injury in the fourth quarter of the opener. Taj Gibson and Norvel Pelle would be in line for more playing time if Noel is unable to play on Wednesday. 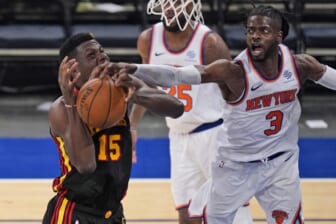 The Knicks have a lineup decision involving starting point guard Elfrid Payton, who missed all three shots he attempted and did not score in his first career playoff game. Coach Tom Thibodeau dodged a direct question on Monday as to whether Frank Ntilikina or another option could get the start for Game 2.

“We have to make some corrections and be ready for Game 2,” Thibodeau said.