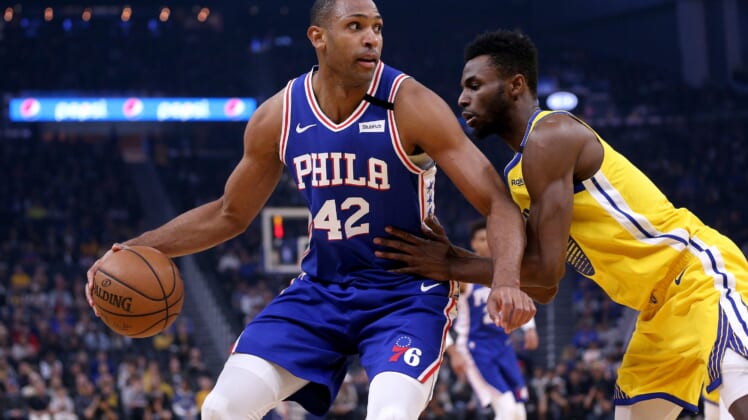 The first Philadelphia 76ers trade of the Daryl Morey era is pretty significant for the franchise. According to multiple media reports, Philadelphia has dealt high-priced big man Al Horford and multiple picks to the Oklahoma City Thunder.

According to ESPN’s Adrian Wojnarowski, Philadelphia is sending a second-round pick in Wednesday’s draft (34th overall) as well as a lightly protected 2025 first-round pick.

The Thunder are also getting young European point guard Vasilije Micic in the deal. He’s considered one of the top players at that position overseas. He was selected in the second round of the 2014 NBA Draft by Philadelphia.

So. This is how the trade breaks down.

Philadelphia saves north of $8 million against the cap this season by moving on from Horford’s bloated contract. It also gets out from under the remaining two years of his four-year, $109 million contract.

Rumors had persisted that the 76ers were looking to move Horford after a down first season in the city of Brotherly Love. That has now come to fruition.

To be clear. This is a big move for Morey and Co. Not only did Philadelphia get out from under Horford’s contract, it added a capable perimeter threat in that of Green. Remember, outside shooting had proven to be a downfall under recently-fired head coach Brett Brown over the past several seasons.

Oklahoma picked up three selections in the trade of Chris Paul to the Phoenix Suns. That deal also included two pick swaps. By dealing Green to the Sixers days after acquiring him from the Los Angeles Lakers, the Thunder ultimately picked up two first-round picks and a second-round pick for guard Dennis Schroder.

It’s absolutely stunning how many picks Thunder general manager Sam Presti has been able to pick up over the past couple years. It’s certainly going to help make the small-market team playoff contenders after a surprise appearance in the postseason this past season.

As for Horford, he’s going to be a nice veteran presence for this otherwise young teams.

The Philadelphia 76ers trade of Al Horford to the Oklahoma City Thunder appears to be a win for both teams. That’s for sure.