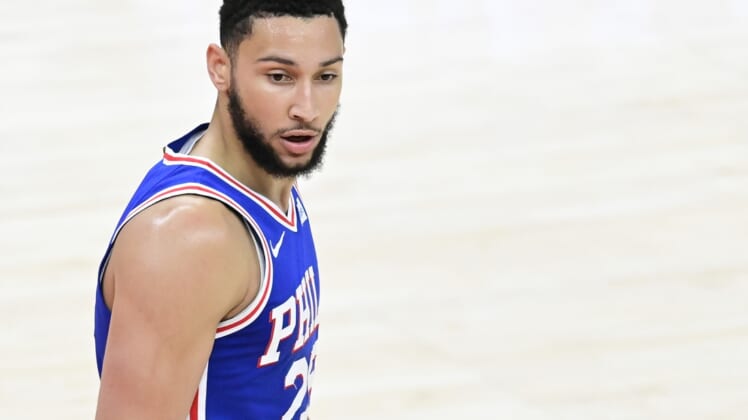 May 31, 2021; Washington, District of Columbia, USA; Philadelphia 76ers guard Ben Simmons (25) looks down court in the second half during against the Washington Wizards game four in the first round of the 2021 NBA Playoffs. at Capital One Arena. Mandatory Credit: Tommy Gilligan-USA TODAY Sports

Teams that already have engaged with the Sixers have been met with a “high price threshold” for the three-time All-Star, per the report.

“(The 76ers) want an All-Star-caliber player in return,” a source told The Athletic.

Simmons, who turns 25 on July 20, is on the trade block following a disastrous performance in the playoffs as the top-seeded Sixers lost to the Atlanta Hawks in the Eastern Conference semifinals.

He was just 15 of 45 (33.3 percent) from the free-throw line in the seven-game series and he attempted just 14 shots from the field over the final three games.

Simmons’ 2020-21 averages of 14.3 points, 7.2 rebounds and 6.9 assists were all the lowest marks of his four NBA seasons. He did make his third straight All-Star team and finished second in the Defensive Player of the Year voting to Utah Jazz center Rudy Gobert.

The 6-foot-11 Simmons announced last month that he would not compete for Australia at the upcoming Tokyo Olympics. He said he needed the time to focus on his individual skill development.