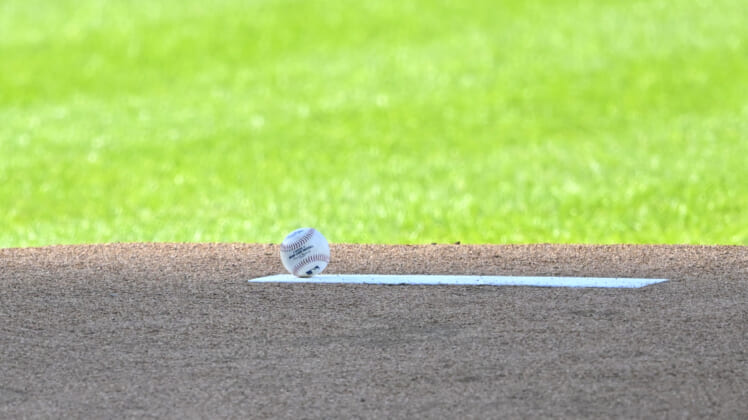 The Minnesota Twins are a team teetering on the brink of contention, but their pitching staff continues to be the black eye on what otherwise looks like a talented roster mixed with high-end talent and young players reaching their potential.

As fanbase pressure builds leading up to the August 2 MLB trade deadline, the Twins have been linked to several names all season, and they’ve even completed several trades as the season was getting underway.

Mostly, they’ve been rumored in deals that continue to address the starting rotation while trying to patch together a bullpen that’s fallen apart at the seams.

Despite being in first place of the AL Central, the confidence in holding onto that lead for the duration of the season is slipping. Both the Cleveland Guardians and Chicago White Sox are at their heels and also boast talented rosters that could take a second-half surge.

With all three teams being active in trade negotiations, we turn our attention to the Twins today, where two teams have reportedly been scouting their Triple-A prospects in St. Paul. According to Darren Wolfson of KSTP, both the San Diego Padres and Pittsburgh Pirates had scouts watching some of the most pro-ready prospects in the Twins’ organization as recently as this week.

Let’s look at a couple of trades that boost the Twins’ pitching staff over the second half of the year.

Minnesota Twins work out another trade with San Diego Padres

The Twins already worked out one trade with the San Diego Padres, landing Emilio Pagan and Chris Paddack in exchange for Taylor Rogers and Brent Rooker. The two front offices have a familiarity with one another, making a second deal a possibility.

Obviously, the Twins would be looking for even more pitching, and the Padres certainly have a lot of arms. If they’re willing to part with a starter, Blake Snell could be the one to go. Of the seven Padres pitchers with 10 or more starts, Snell currently holds the highest ERA, yet he has the second-highest salary of the group. I’d say Yu Darvish, Joe Musgrove, Sean Manaea, and MacKenzie Gore are their key four, and they still have Mike Clevinger and Nick Martinez available as well.

Clearing Snell and his $13 million salary off the books could be valuable if the Padres are looking at making another big-name acquisition at the deadline. Working out a ‘fair value’ trade is tricky, as the Twins and Padres likely are also negotiating salary amounts — figuring out whether either side will be willing to pay more or less of Snell’s salary.

If the Twins take the full amount, the Padres likely won’t get much. If the Padres are willing to pay a majority of Snell’s salary, they could get a much nicer trade package.

Adrian Morejon, 23, has battled some shoulder inflammation this season, but if it weren’t for his setback, he’d likely be with the big-league club. For now, Morejon’s a lefty reliever, but he could become a starter in time as he builds stamina. His four-seam fastball averages 97 mph, but he also has a changeup, curveball, and a slider he’s comfortable throwing as well.

The Twins could immediately plug him into the bullpen (if he’s healthy), and possibly even rely on Morejon to make some starts down the stretch if need be. At worst he could be a long reliever, taking over when one of their starters has an early exit.

With the Padres scouting Twins AAA prospects, it appears they’re after players who are close to pro-ready. Infielder Spencer Steer has split time between second and third base for the St. Paul Saints, and he’s also played some shortstop. He’s the seventh-ranked prospect in their organization and has shown an ability to hit for both average and power, having hit 20 home runs in 80 minor league games this season.

As usual, the Pittsburgh Pirates are out of contention by the trade deadline, which means they have several veterans up for grabs. One particular arm who’s likely being targeted by the Twins is a former member of the AL Central in starting pitcher Jose Quintana. An All-Star in 2016 with the Chicago White Sox, Quintana’s quietly put together a strong season for an otherwise struggling Pirates team.

Will Quintana make Twins fans clamoring for an ace happy? No. Not even close. Is he remarkably better than Dylan Bundy and Chris Archer? Absolutely. At this point, that alone should be considered a win.

Giving up on the 13th overall pick from the 2019 MLB Draft in Keoni Cavaco isn’t a small price to pay, but at this point, Quintana can help the current team push for the playoffs, instead of hoping a very raw baseball prospect will be able to handle third base. Cavaco’s currently the 19th-ranked prospect among the Twins’ top 30 according to MLB.com.

Losing Matt Wallner is the bigger loss. One of the Twins’ representatives in the Futures game that shows off the top upcoming MiLB prospects around the sport, Wallner was noted to have the most trade value among Twins prospects leading up to the deadline. Just how far that stretches remains to be seen.

Wallner, the 8th-ranked prospect in the Twins’ system, has otherworldly power, and at 24, he may be ready for the big leagues. The Twins already have two smooth-hitting corner outfield prospects who need more plate appearances in Alex Kirilloff and Trevor Larnach, making Wallner an expendable trade chip.

Meanwhile, Quintana would immediately become one of the Twins’ top-three pitchers, giving them a better option should they reach the postseason.

Another player who could entice the Twins is Pirates closer David Bednar. Their lone representative at the All-Star game, the Pirates may not be willing to part with the 27-year-old who’s arbitration-eligible through 2026. We’ll see who’s more willing to budge as the deadline nears.