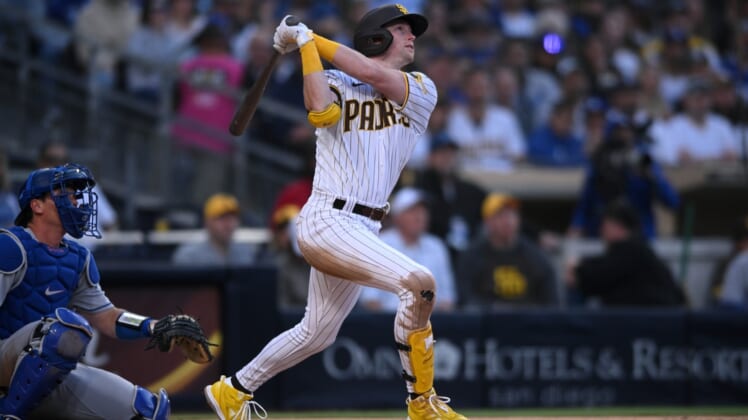 C.J. Abrams scored from third on Austin Nola’s walk-off sacrifice fly to left in the bottom of the 10th Saturday night to give the host San Diego Padres a 3-2 win over the Los Angeles Dodgers.

Abrams was on second to open the 10th and moved to third on pinch-hitter Trent Grisham’s sacrifice bunt. The rookie shortstop scored easily ahead of Chris Taylor’s throw to the plate.

The win snapped a 10-game Dodgers winning streak against the Padres.

Jurickson Profar saved the Padres in the top of the 10th, throwing out ghost runner Taylor at third trying to advance on a flyout by Gavin Lux. Padres reliever and winner Robert Suarez (1-1) then struck out Mookie Betts to end the inning.

Betts whiffed four times, including leaving the bases loaded in the second.

The Dodgers tied the game 2-2 in the top of the eighth on Trea Turner’s two-run, two-out double over the leaping Profar.

Taylor and Lux opened the inning on back-to-back singles against reliever Luis Garcia, who then struck out Betts. Closer Taylor Rogers came on to strike out Freddie Freeman before giving up the game-tying line drive to left.

The Padres scored their first run against Dodgers left-handed starter Tyler Anderson in the second. Profar led off the inning with a double into the left field corner, moved to third on Eric Hosmer’s groundout to first and scored on Wil Myers’ sacrifice fly to center.

Jake Cronenworth homered off Anderson an inning later to make it 2-0.

Padres starter Yu Darvish survived a shaky start to pitch six scoreless innings, retiring the final 13 Dodgers he faced. But he struggled to get through the first two innings — facing six full-count situations while throwing 58 pitches. Darvish issued one walk in the first. Then he loaded the bases in the second before striking out Betts.

Darvish allowed one hit and three walks with seven strikeouts. Anderson gave up two runs on four hits, with three walks and four strikeouts in 4 2/3 innings.