Nani continued his sensational season with a stunning 80th-minute strike to lift visiting Orlando City to a 2-1 victory over Inter Miami on Friday.

In the process, the Lions moved back alone into second place in the Eastern Conference, two points behind New England.

Nani now has six goals and three assists, making him directly involved in half of Orlando’s goals this year. Two of those goals and all of those assists have come in the Lions’ last two games.

Gonzalo Higuain scored six minutes after coming into the match as a second-half substitute to give Inter Miami (2-6-2, 8 points) a brief lead, after he was left at home due to fitness concerns in Miami’s previous game, a 1-0 loss at D.C. United on June 19.

Fit or not, Higuain has five goals in a season when no one else for Miami has more than one. But unlike the last time he scored, this time he could not prevent the Herons from falling to a fourth consecutive defeat.

At home and with nearly a full week to prepare, Miami had the better of play in the opening hour, though it created only a couple of serious chances. 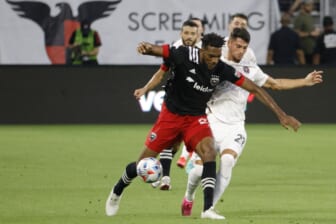 That changed when Higuain came on the field in the 61st minute. When he was afforded space a few minutes later, he unleashed a 25-yard strike low beyond goalkeeper Brandon Austin’s dive and inside the left post.

But the lead held only six minutes before Nani reached a long diagonal ball down the right flank and looped a cross back into the penalty area.

Mueller was there to meet it, hammering a first-time volley that gave goalkeeper John McCarthy little chance.

McCarthy also had little hope seven minutes after that, when Nani got the ball on the left flank, cut in toward the corner of the penalty area, then curled a right-footed finish into the top right corner.