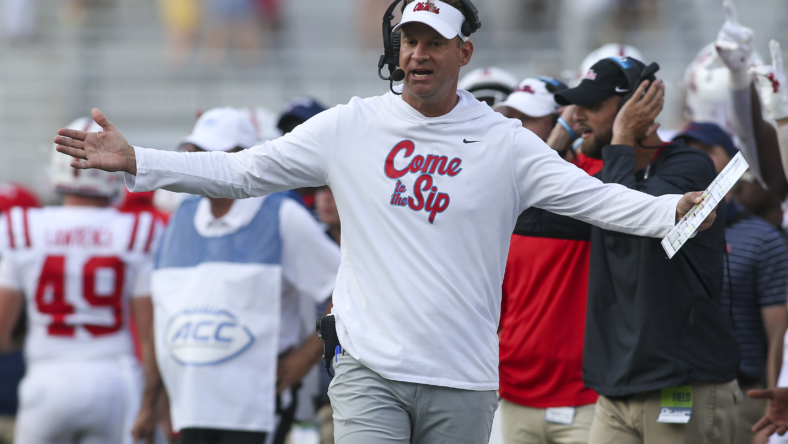 It’s not uncommon to see tempers flare on game day in any sport. For head coach Lane Kiffin and the Ole Miss Rebels, that moment came early in their fifth game of the season, taking place on Saturday. The stakes are already high, with Ole Miss still undefeated at 4-0, taking on a ranked Kentucky Wildcats team that is also 4-0.

On their opening drive of the game, Ole Miss quarterback Jaxson Dart had his team marching down the field before coming to a stop on 4th-and-1, yet coach Kiffin appeared ready to go for the conversion as they were at the Kentucky 46-yard-line. Only, sophomore tight end Michael Trigg committed a false start penalty to back the team up five yards, making the attempt a 4th-and-6. No longer liking his team’s chances to convert, Kiffin opted to punt.

Yet, once Trigg made his way back to the sideline, Kiffin was waiting for him and even gave his player a little shove, which is never a good look. Here’s the clip so you can see the incident for yourself.

While it’s easy to say this is a very small shove that certainly won’t hurt anyone. No coach should be laying their hands on a player, definitely not in a negative manner. It’s easy for a small push to turn into something bigger, whether it’s from the coach or if the player decides to retaliate.

Credit to Trigg for taking it all in stride, as he knows he made a mistake that cost his team, and it’s likely an error that will carry with him all game until he gets a chance to redeem himself, but for Kiffin? For a grown man? This is just embarrassing.

Criticizing a player for having a mental lapse is one thing, but taking the goof to a physical level shouldn’t be happening on any competitive field. Either way, if the Rebels end up emerging with a win over their SEC rivals, all will likely be forgotten, which is what Kiffin has to hope for if he even realizes what he did in the moment.

Kiffin is 81-42 in his college coaching career and has gone 19-8 in his three seasons at Ole Miss thus far. Perhaps moments like this are why the former Raiders head coach wasn’t able to command respect in the NFL, going 5-15 from 2007 to 2008 before being let go. Who knows? For now, the coach seems to have repaired his image, for now.