It’s become obvious. Odell Beckham Jr. was not happy with the Cleveland Browns. As he works out the details of his release from the team, more details of his demise are coming to light. Mary Kay Cabot of Cleveland.com reports Beckham had asked to be traded away from the Browns multiple times, going back to this past offseason.

The report states that OBJ also requested a trade after the Steelers-Browns game last week, in which the receiver caught his only target for six yards.

To his credit, at least OBJ realized things weren’t working out, and he tried to get ahead of the problem by requesting a trade several months earlier.

While the Browns may have been hesitant to trade their prized acquisition from 2019 for reduced compensation, it would have been better than releasing him outright. At the same time, it’s hard to fault them for trying to make things work with a three-time Pro Bowl wideout.

It will be very interesting to see where Beckham Jr. lands next and what type of career he can have. With just one 1000-yard season in Cleveland, expect him to seek an opportunity to be a focal point of an offense again, but we’ll see. 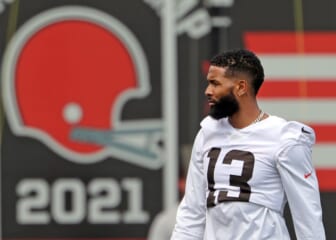