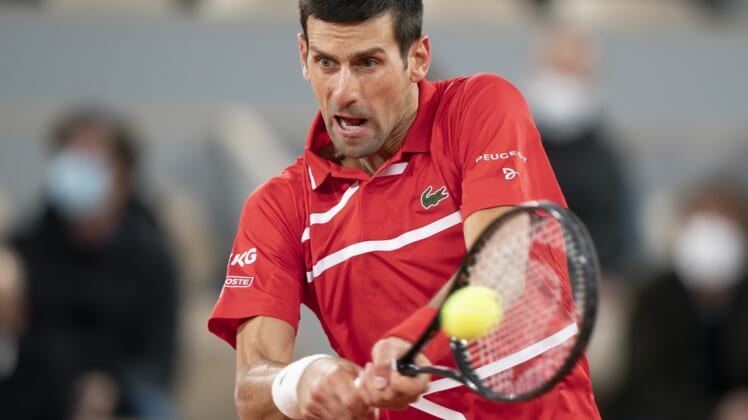 Playing for the first time since winning his ninth Australian Open title in February, Djokovic fired 20 winners in a 6-4, 6-2 victory against 19-year-old Jannik Sinner of Italy. The No. 1-ranked Serbian, a two-time winner of the event, improved his record in 2021 to 10-0.

“It feels great (to be back and) also playing in Monaco, where I reside,” Djokovic said after the one-hour, 34-minute match. “I have used this club as a training base for almost 15 years, so it feels like playing at home.

“It was a very good encounter. I thought it was a great first match (and) a big challenge for me. Jannik is in form. He played the final (in) Miami and has been playing well. I just hung in there today and managed to find the right shots and the right game at the right time.”

Nadal looked sharp in his first action since losing to Stefanos Tsitsipas of Greece on Feb. 17 in the Australian Open quarterfinals. The third-seeded Spaniard struck 16 winners in a 6-1, 6-2 victory against Argentine qualifier Federico Delbonis in 81 minutes, improving his record in Monaco to 72-5.

“It was a solid match,” Nadal said. “Of course, a very positive result. He’s a good player on clay. … Nothing unbelievable, but nothing wrong. Just a solid match, a positive start. I think I did what I had to do today.”

Nadal’s next opponent will be No. 14 seed Grigor Dimitrov of Bulgaria, who saved six of seven break points in a 7-6 (3), 6-4 victory against France’s Jeremy Chardy. Nadal is 13-1 in their head-to-head series.