Novak Djokovic dispatched of the “King of Clay” and is now heavily favored to claim his second French Open men’s singles title on Sunday.

Djokovic rallied from a set down to beat 13-time champion Rafael Nadal on Friday and has been installed as the -250 favorite by BetRivers to beat Greece’s Stefanos Tsitsipas in Sunday’s final.

Djokovic won his lone title to date at Roland Garros in 2016. The Serbian is also attempting to move within one of the Grand Slam singles title record of 20 shared by Nadal and Roger Federer.

Meanwhile, Tsitsipas will be making his first appearance in a Grand Slam final.

Djokovic is the -190 favorite to win the first set and the -186 favorite to take the second. A three-set win by either player also has the shortest Set Betting odds at +195. 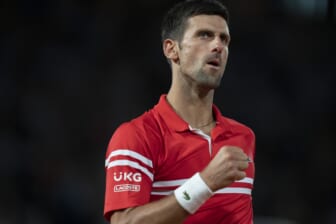 Two of Nadal’s three French Open losses have come against Djokovic. He also lost to him in the 2015 quarterfinals, and Nadal’s career record at Roland Garros is now 105-3.

Nadal’s other loss in Paris came against Robin Soderling in the fourth round in 2009. Soderling reached the final before losing to Federer and then lost to Nadal in the 2010 French Open final.

Djokovic nearly failed to reach the epic showdown with Nadal. The 34-year-old had to rally from two sets down to beat Lorenzo Musetti in the fourth round.

“You tell yourself there is no pressure,” Djokovic said of Friday’s match against Nadal, who surrendered only seven games to Djokovic in last year’s final. “But there is a lot of pressure, trust me.”

“All I can think of is my roots,” Tsitsipas said afterward. “I come from a really small place outside of Athens. My dream was to play here and I would never have thought I would achieve it. … There were a lot of people cheering me on in my country and I’m very happy that Greece is part of the tennis community now.”