Top-seeded Novak Djokovic dispatched king of clay Rafael Nadal in style on Friday when he registered a 3-6, 6-3, 7-6 (4), 6-2 victory to advance to the French Open final in Paris.

Djokovic won the final five games of the epic four hour, 22-minute semifinal clash to drop the third-seeded Nadal’s record at Roland Garros to 105-3. Nadal was aiming for his 14th French Open title.

“It was amazing to play in this incredible match,” Djokovic said in a courtside interview. “It was for sure the most beautiful match I’ve played here in Paris.”

Djokovic will be shooting for his second career title in Paris when he faces fifth-seeded Greek Stefanos Tsitsipas on Sunday.

Nadal and Djokovic traded spectacular shots throughout the match and Nadal was in good position when he won three straight games in the third set for a 6-5 edge. But the Spaniard was unable to convert a set point and Djokovic recovered to win the game and the ensuing tiebreaker.

Djokovic served three of his six aces in the decisive fourth set and had 11 winners against five unforced errors in the set. Nadal wilted and had more errors (eight) than winners (six).

“It wasn’t my best day out there,” Nadal said in his press conference. “The shots weren’t that effective tonight and against a player like him, you’re not able to take him out of his position.

“I had a big chance at set point. Anything could happen in that moment. These kinds of mistakes can happen. If you want to win, you can’t make them. I tried my best.”

Two of Nadal’s three French Open losses have come against Djokovic. He also lost to him in the 2015 quarterfinals.

Nadal’s other loss in Paris came against Robin Soderling in the fourth round in 2009. Soderling reached the final before losing to Roger Federer and then lost to Nadal in the 2010 French Open final. 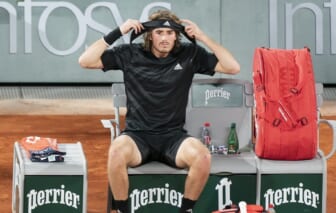 Meanwhile, Tsitsipas recorded 36 winners against 43 unforced errors and scored eight aces in his win over Zverev.

He won the first two sets before Zverev notched a ferocious comeback. Tsitsipas steadied himself and was the stronger player in the decisive set of a match that lasted three hours, 37 minutes.

“All I can think of is my roots,” Tsitsipas said afterward. “I come from a really small place outside of Athens. My dream was to play here and I would never have thought I would achieve it. … There were a lot of people cheering me on in my country and I’m very happy that Greece is part of the tennis community now.”

Zverev registered 11 aces but was hurt by seven double faults. He racked up 45 winners but had 47 unforced errors.