Novak Djokovic a winner in first match at ATP Finals 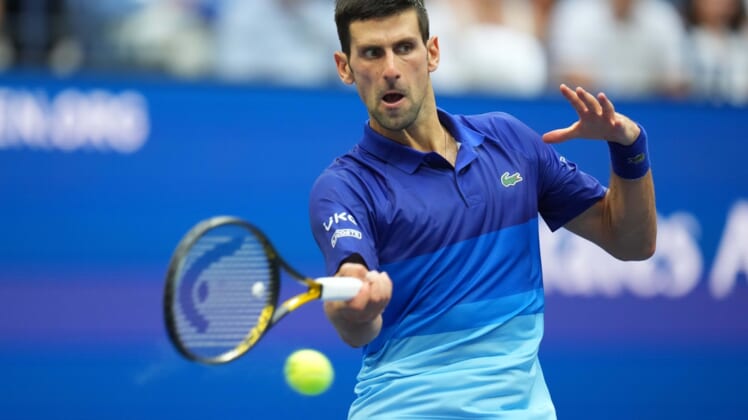 Top seed Novak Djokovic of Serbia and No. 5 seed Andrey Rublev of Russia were winners Monday as group action continued at the Nitto ATP Finals in Turin, Italy.

Djokovic won 35 of 39 first-service points (89.7 precent) and recorded 10 aces in his first match in the event.

The world No. 1 took a fall during the first game, and Ruud took a 2-0 lead before Djokovic battled back. He won the final four points of the tiebreak.

“I recovered from that fall on that break point in that first game,” Djokovic said in his on-court interview. “It was very strange. I played a good forehand and came into the net and had a pretty comfortable overhead and I slipped, tripped, dropped my racket and lost my serve.

“The conditions here are quite tough. If you lose your serve, it is difficult to get it back. But I managed to stay in. I am very pleased with the way I handled the match.”

Tsitsipas saved five of seven break points and hit 12 aces, but Rublev was too good, winning 37 of 41 first-service points (90.2 percent).

“When you serve good, it’s always the key,” Rublev said. “But it was not even just the serve. I was returning really aggressive; from the baseline I was also really aggressive. Today I played a great match and I’m really happy.”

The ATP Finals are the tour’s season-ending championships and pit the top eight singles players and doubles teams, per the ATP rankings. In singles, players begin with a single round-robin in two groups of four. The top two players in each group advance to the knockout phase.

Djokovic and Rublev are in the green group and are 1-0. Play will continue in the red group Tuesday when Daniil Medvedev of Russia and Alexander Zverev of Germany, both 1-0 and the second and third seeds, respectively, face off.

No. 6 Matteo Berrettini of Italy and No. 7 Hubert Hurkacz of Poland, both 0-1, also will duel.

Berrettini retired during his match against Zverev on Sunday, casting doubt on whether his finals were over, but the ATP still has Berrettini’s match against Hurkacz scheduled as planned.