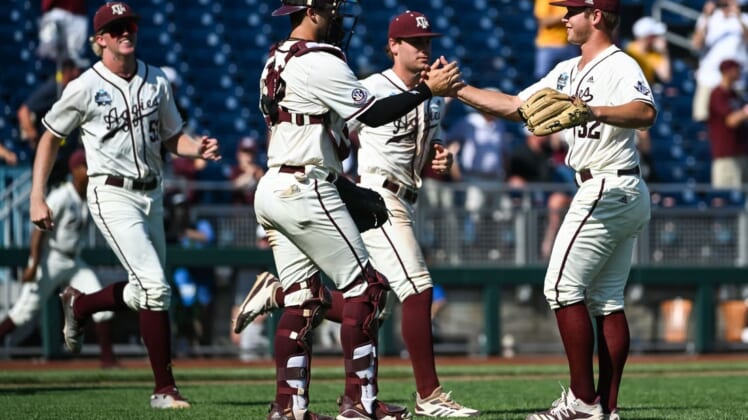 Jordan Thompson reached base four times on two singles and two walks to help No. 5 Texas A&M rout No. 9 Texas 10-2 in a College World Series elimination game at Omaha, Neb., on Sunday.

Ryan Targac scored four times for Texas A&M (43-19), which advances to play either Notre Dame or Oklahoma on Tuesday. Austin Todd had three hits for the Longhorns, who finish 47-22.

Texas led 2-0 before the Aggies scored four runs in the bottom of the second. The Aggies’ Brett Minnich stroked an RBI double, Thompson had a run-scoring single, and Trevor Werner capped an 11-pitch at-bat against Texas’ Lucas Gordon with a two-run single to left-center field.

Texas A&M scored single runs in the third and fourth innings and plated two in the fifth to make the score 8-2. Targac stole home on a double steal in the seventh as the Aggies were never threatened.

Texas star Ivan Melendez went 0-for-4 with two strikeouts. He won the Dick Howser Trophy on Friday as the most outstanding player in college baseball.