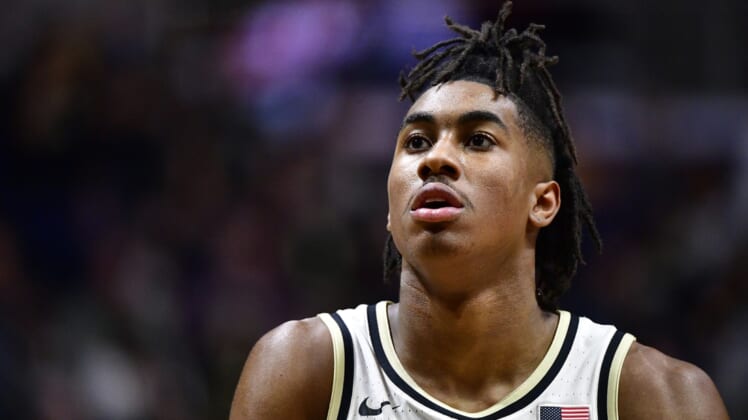 Purdue is in a bizarre position, as the Boilermakers are ranked No. 3 in the nation, but they actually sit in seventh place in the Big Ten standings.

The Boilermakers will look to begin their climb up the conference standings Saturday when they travel to University Park, Pa., to take on Penn State.

Purdue (12-2, 1-2) boasts an early season resume that includes wins over North Carolina, Villanova and Iowa. However, the victory over the Hawkeyes was the Boilermakers’ only league win in three tries, as the team fell on a buzzer-beater at Rutgers last month before falling at home to Wisconsin on Monday, 74-69.

Against the Badgers, Purdue had a lopsided scoring output as Zach Edey scored 24 points on 10-of-17 shooting, while his teammates combined to shoot 13-of-39 for 45 points. Nobody else on the team made more than three buckets.

“We just have to grow up and be tougher, that’s it,” Purdue coach Matt Painter said. “That was a great lesson for us. You hate to have a loss as a lesson, but that’s competition.”

The Boilermakers allowed Badgers guard Johnny Davis to score 37 points, which could be a bad omen against a Nittany Lions team that features talented guards in Jalen Pickett and Sam Sessoms. Pickett averages 12.7 points and a team-high 4.2 assists a game. Sessoms contributes 12.4 points and shoots 42.4 percent from long distance.

Penn State (7-5, 2-2) has won two in a row following a multi-week break that resulted from several COVID-19-related cancellations. The Nittany Lions disposed of Northwestern 74-70 their last time out, riding Seth Lundy’s 23 points and Pickett’s 18 points to the road victory.

“I think for anybody in the Big Ten, it’s hard to win on the road,” Penn State coach Micah Shrewsberry said. “So any time you get an opportunity to win outside of your building, you’ve got to cherish every single one of those because as you see, it’s not going to happen very much. … I just thought this was a gritty, tough win for us, and I’m happy to get out of here with a win.”

Shrewsberry’s squad will be hard-pressed to escape with a victory against a Purdue team that averages 85.9 points — fourth-highest total in the country — and also ranks in the top 10 nationally with 18.9 assists per game.

Ivey and Edey (15.6 points) are the top two scorers on the team. Both were named to the Wooden Award Midseason Top-25 Watch List this week, as was Purdue forward Trevion Williams (13.0 points, 8.8 rebounds). The Boilermakers are the only team with three players on the Watch List.

Purdue won both matchups between the squads last season. In the game at Penn State, the Boilermakers cruised to a 73-52 victory. They have won 11 of the last 12 matchups overall.