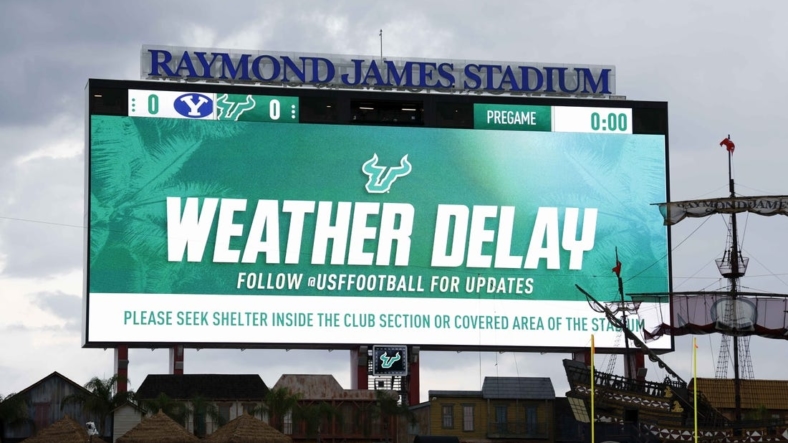 Jaren Hall threw for 261 yards and two touchdowns to lead No. 25 BYU to a 50-21 victory over South Florida in Tampa, Fla., on Saturday.

Christopher Brooks ran for 135 yards and a touchdown in his debut for the Cougars. Puka Nacua added 98 yards from scrimmage and two rushing touchdowns for BYU before leaving with a sprained ankle late in the first quarter.

BYU (1-0) notched its second-ever win in the state of Florida after totaling 575 yards and averaging 8.3 yards per play. The Cougars previously defeated UCF in the 2020 Boca Raton Bowl.

Gerry Bohanon threw for 172 yards and an interception in his South Florida debut. The Bulls (0-1) never recovered after giving up 38 unanswered points in the first half.

A delay prompted by lightning and rain pushed the kickoff back 2 1/2 hours. That didn’t stop BYU from charging out of the gates on both sides of the ball. The Cougars averaged 8.6 yards per play in the first half and racked up 337 total yards by halftime.

Nacua raced 75 yards on a jet sweep on the game’s first play from scrimmage to give BYU a 7-0 lead. He ran for a 5-yard score on an end around to extend the lead on the Cougars’ next series. Then, Max Tooley returned an interception 33 yards to extend BYU’s lead to 21-0 midway through the first quarter.

The Cougars scored their fourth touchdown when Hall tossed a 21-yard pass to Keanu Hill with four minutes left in the first quarter.

Hall’s second touchdown pass — a 13-yarder to Dallin Holker — and a 39-yard field goal from Jake Oldroyd helped BYU carve out a 38-0 lead with 2:11 left before halftime.

USF got on the board with 14 seconds left in the first half on Jaren Mangham’s 1-yard run. The Bulls cut their deficit to 38-14 when Jimmy Horn Jr. returned the opening second-half kickoff 89 yards for a touchdown.

BYU didn’t let it get any closer. After getting a safety on a fumbled snap, Brooks broke free for a 52-yard scoring run to put the Cougars up 47-14 with 5:32 left in the third quarter.