No. 17 Pitt pulls out wild Backyard Brawl win over WVU 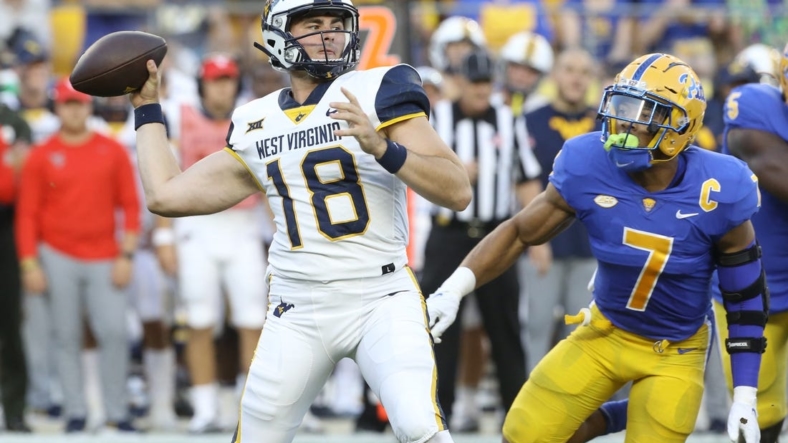 M.J. Devonshire returned an interception 56 yards for a tiebreaking touchdown with 2:58 to play as No. 17 Pitt pulled out a 38-31 victory over West Virginia on Thursday in Pittsburgh.

In a back-and-forth battle, the Panthers (1-0) wound up outlasting the Mountaineers (0-1), snapping a three-game losing streak in Backyard Brawl, which hadn’t been played since 2011.

After the teams exchanged punts, Pitt took over on its own 8-yard line with just over six minutes to go.

Southern California transfer Kedon Slovis led a seven-play, 92-yard drive, connecting on all five of his passes, including a 24-yard touchdown toss to Israel Abanikanda with 3:41 left.

Following the kickoff, on the Mountaineers’ second play from scrimmage, Daniels threw a pass that bounced off Ford-Wheaton’s hands, popped up in the air and was picked off by Devonshire. The cornerback weaved his way through traffic to give Pitt the lead.

West Virginia turned the ball over on downs at the Pitt 28-yard line on a fourth-down incomplete pass in the final minute to seal the outcome.

Slovis finished 16 of 24 for 308 yards and a touchdown. Panthers running back Rodney Hammond scored two TDs while amassing 74 yards on 16 carries. Jared Wayne had three receptions for 89 yards.

The game was tied 10-10 at halftime after West Virginia’s Casey Legg booted a 24-yard field goal as time expired in the second quarter, capping a 74-yard drive.

West Virginia opens its Big 12 schedule in its next contest, a home game against Kansas on Sept. 10. The same day, Pitt will play host to Tennessee.