No. 11 UCLA cruises into Sweet 16 with rout of No. 14 Abilene Christian 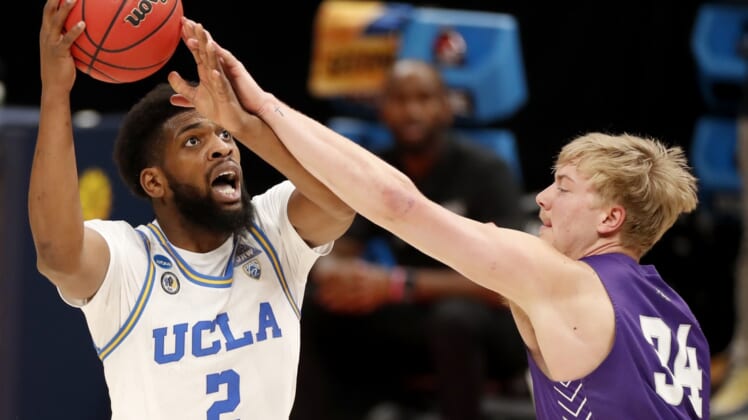 UCLA (20-9) moves onto the Sweet 16 to face the winner of 10th-seeded Maryland and second-seeded Alabama on Saturday or Sunday.

Cody Riley added 12 points and 12 rebounds for the Bruins, who led by 10 at the half and slowly extended their advantage to as many as 26 points in the final minutes. Jaime Jaquez Jr. hit for 10 points for UCLA, which shot 46.6 percent in the victory.

UCLA is making its 50th appearance in the NCAA Tournament, the program’s first since 2018, and advanced to the Sweet 16 for the first time since 2017.

The Bruins broke open the game with an 18-0 run through the middle of the first half, turning a 12-8 deficit into a 26-12 lead after a putback jumper by Jaylen Clark at the 6:51 mark. Abilene Christian missed 11 consecutive field goals during that stretch and went scoreless for more than nine minutes.

The Wildcats answered with a 7-0 run of their own to claw back to within 26-19, but UCLA scored five of the half’s final seven points to go up 31-21 at the break.

Coryon Mason paced the Wildcats with eight points in the half. Jake Kyman led UCLA with eight points as the Bruins outshot Abilene Christian 45.2 percent to 26.9 percent and had just three turnovers in the first 20 minutes.

UCLA opened the second half with a 14-1 run that all but settled things. Abilene Christian missed its first seven shots of the half and never made a dent in the margin.

Mahki Morris led the Wildcats with 14 points, all in the second half, with Mason and Kolton Kohl adding eight points each.

Abilene Christian, who earned a post in the NCAA Tournament with a win in the Southland Conference tournament and advanced to this event’s second round with a stunning upset of third-ranked Texas, finished the season at 24-5. This was just the Wildcats’ second ever trip to the NCAA Tournament.