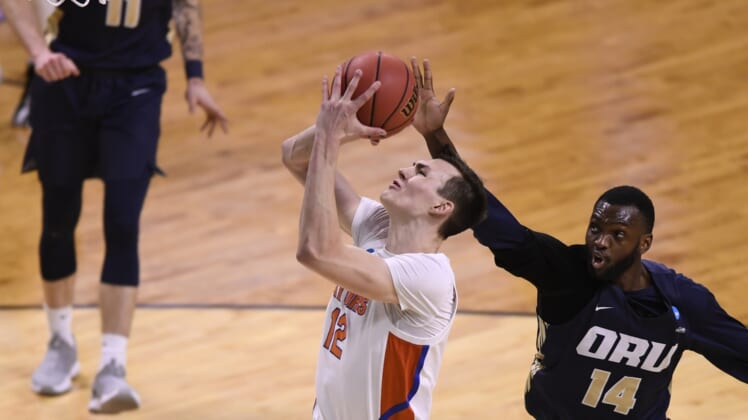 Kevin Obanor scored 20 of his 28 points in the second half and No. 15 seed Oral Roberts continued its magical run with an 81-78 upset of seventh seed Florida in Indianapolis on Sunday to advance to the Sweet 16.

Max Abmas added 26 points for the Golden Eagles (18-10), who have won seven straight. Oral Roberts will next play No. 3 seed Arkansas in a South Region contest.

Obanor’s jumper gave the Golden Eagles a 77-76 lead with 2:53 left after they trailed by 11 in the second half.

Noah Locke countered for Florida’s 78-77 lead but DeShang Weaver’s 3-pointer with 2:10 left, his first and only points of the game, put Oral Roberts up 80-78.

Locke missed a 3-pointer with 22 seconds remaining and Obanor made the second of two free throws with 16.3 seconds left for an 81-78 lead.

Oral Roberts became the bracket buster when the Golden Eagles defeated Ohio State 75-72 in overtime on Friday, marking the ninth time a 15 seed had knocked off a No. 2 seed. It was their first NCAA Tournament win since 1974.

Tyree Appleby, Florida’s third-leading scorer who left in the second half of Friday’s overtime win over Virginia Tech with facial lacerations, scored 14 points.

Florida reserve forward Omar Payne returned after coach Mike White’s decision not to play him in the Virginia Tech game due to a flagrant 2 foul in the SEC tournament. Payne had four points.

The Gators were also boosted again by the presence of Keyontae Johnson, who collapsed on the court in December and has missed the rest of the season.