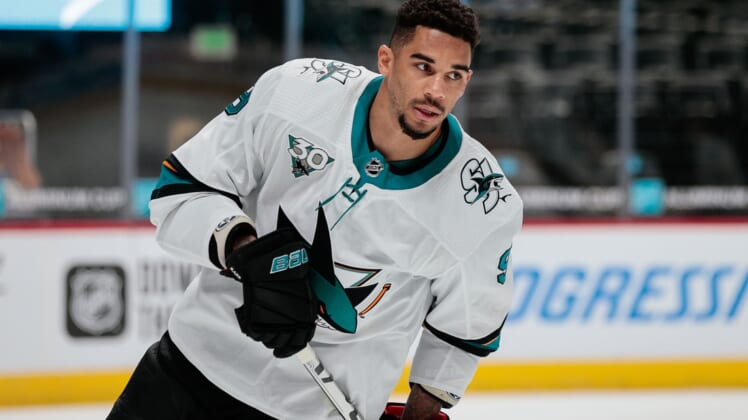 Evander Kane will miss more than one-quarter of the San Jose Sharks’ season after the NHL suspended him for 21 games Monday due to a violation of COVID-19 protocol.

The league also announced that, following a separate investigation, domestic abuse charges levied by Kane’s wife, Deanna “Anna” Kane, “could not be substantiated.”

Kane said in a statement, “I would like to apologize to my teammates, the San Jose Sharks organization, and all Sharks fans for violating the NHL COVID protocols. I made a mistake, one I sincerely regret and take responsibility for. During my suspension, I will continue to participate in counseling to help me make better decisions in the future. When my suspension is over, I plan to return to the ice with great effort, determination, and love for the game of hockey”

The Sharks added in a statement, in part, “While we are encouraged by Evander’s commitment to moving forward, we are extremely disappointed by his disregard for the health and safety protocols put in place by the NHL and the NHLPA. We will not be commenting further on Evander’s status prior to the conclusion of the NHL’s mandated suspension.”

The NHL does not require its players to be vaccinated, but its protocols are stricter for unvaccinated players. In addition, Canadian quarantine rules could prevent unvaccinated U.S.-based players from competing in road games north of the border.

Last month, the NHL announced the results of another investigation of Kane, finding no evidence that he bet on NHL games.

Anna Kane, who reportedly is in the process of divorcing Evander Kane, had alleged that he bet on Sharks games. She posted on social media, “How does the NHL let a compulsive gambling addict still play when he’s obviously throwing games to win money?”

Evander Kane admitted he had a gambling problem that led to him filing for bankruptcy protection but denied betting on NHL games.

Kane, 30, sat out the Sharks’ training camp and wasn’t with the team when it won its opener Saturday, 4-3 over the visiting Winnipeg Jets. His suspension would be up in time for him to return to action on the road against the New Jersey Devils on Nov. 30.

Last season, Kane led the Sharks in goals (22) and assists (27) while appearing in all 56 games. It was his sixth consecutive season with 20-plus goals.