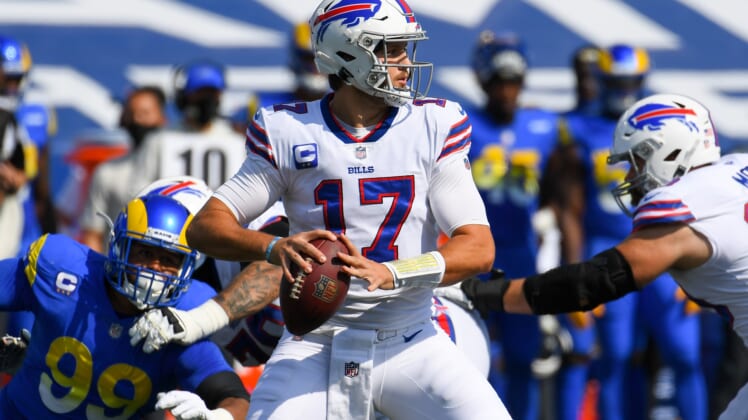 The Buffalo Bills and Los Angeles Rams took the field in Week 3 with both teams looking to prove themselves as legitimate Super Bowl contenders. In a wild game that saw a blown 28-3 lead and two epic comebacks.

Buffalo started cooking early, with Josh Allen looking like an NFL MVP candidate. After taking a 28-3 lead midway through the third quarter, the Bills were on their way to making an emphatic statement in Week 3. Meanwhile, the Rams were being exposed as a pretender.

Suddenly, everything clicked for Los Angeles. A defense that couldn’t put any pressure on Allen and an offense that struggled to find any momentum, started firing on all cylinders. As time flew by, the Rams chipped away at Buffalo’s lead until they surged ahead 32-28 with four minutes left.

After a brutal fourth-quarter performance, Allen got his shot at redemption. In one of the biggest moments in his NFL career, with the help of an absurd penalty, he came through in the final seconds and delivered.

Here are the winners and losers from the Bills’ epic 35-32 victory over the Rams in Week 3.

The Bills came into the season with a defense capable of winning a Super Bowl, but Allen stood in their way. He showed flashes of greatness, but alarming accuracy issues dragged this offense down with him. Now, with offensive coordinator Brian Daboll scheming up the perfect attack and an outstanding offensive line protecting QB1, greatness is happening.

Allen entered Week 3 with 727 passing yards and seven total touchdowns, coming against the Miami Dolphins and Jacksonville Jaguars. On Sunday, Buffalo’s quarterback took it to a great defense. He diced the Rams’ secondary apart, picking up three passing touchdowns early. But he saved his best for the final drive, putting an ugly fourth quarter behind him, answering the Rams’ comeback with a game-winning drive. Allen is firmly an NFL MVP candidate.

We loved Buffalo’s defense before the season began. A secondary led by shutdown cornerback Tre’Davious White with a front seven capable of domination. As we mentioned above, Allen’s struggles prevented this team from being even better in 2019. He is no longer the problem, but we’re concerned about the defense.

Jared Goff isn’t exactly an elite quarterback, but he had no problem against Buffalo’s defense late in the game. Los Angeles dropped 29 unanswered points in the last 20 minutes of the game, an unfathomable collapse by the Bills’ defense. If the issues get corrected, the Bills can win the AFC East and make a deep playoff run. If not, it will be an unfortunate end for a team with a lot of talent.

It’s just unfair that Donald is this dominant at football. He admittedly had a quiet first-half performance, not recording a sack as this entire front seven failed to get to Allen. He then flipped a switch and went into takeover mode, sparking a comeback that should have led to a victory.

Donald lived in the backfield in the final two quarters, blowing up plays near the goal line. Of course, his real jaw-dropping brilliance came as a pass rusher in a one-man show. We’re used to seeing Donald throw around offensive linemen, but the strip-sack on Allen was a new level of ridiculous. There is no player in the NFL like this man.

Goff wasn’t terrible on Sunday, playing a key role in the second-half comeback, but a baffling interception and a throwaway on fourth down proved costly. However, we did come away from this game even more impressed by the weapons on this offense.

Darrell Henderson Jr. looks like the perfect featured back in Sean McVay’s attack. He rushed for 114 yards and a touchdown on 20 carries, finding holes and exploding for chunks of yards on nearly every touch. Meanwhile, Cooper Kupp (107 yards, one touchdown) and Robert Woods (74 receiving yards, one touchdown) made big plays in the open field. Even without great quarterback play, this offense can hang 30 points on opponents every week.

Everyone expected this to be one of the best games on the NFL’s Week 3 slate and it surpassed expectations. It’s insanely rare to see a 28-3 lead blown, unless you’re watching the Atlanta Falcons. The fact that we had a miraculous comeback and season-defining moment meant this could be a finish for the ages. Instead, it’s clouded by the controversial call at the end.

Pass interference shouldn’t be called in these situations unless it’s blatant. Quite frankly, this fell miles short of being an obvious. Los Angeles battled its way back in a game that seemed over at halftime and this could have been a win for the ages. Instead, the Rams were robbed by an egregious call. NFL players need to decide these exciting games, not referees.