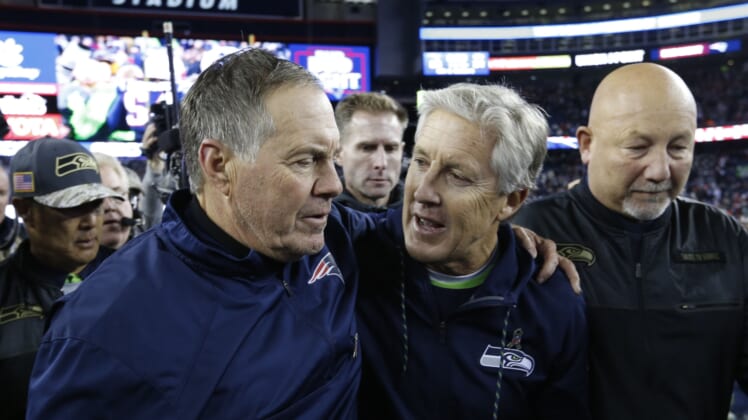 The New England Patriots and Seattle Seahawks are scheduled to play on Sunday Night Football in an exciting clash in Week 2 between two of the NFL’s top teams. However, the primetime game could be in jeopardy as of Friday.

As we saw in Week 1, massive fires along the West Coast have resulted in cities like San Francisco, Portland and Seattle having some of the worst air quality in the world. The NFL monitored the troubling health conditions this past week, before allowing teams to play in California.

Now, the NFL’s marquee game on Sunday Night Football is being monitored with the league ready to step in and take action before the Patriots and Seahawks face off.

Due to the poor air quality in Seattle, the Seahawks moved practice on Wednesday to their indoor facilities. After the session concluded, head coach Peter Carroll told reporters that the NFL is monitoring the air quality index in the city before determining if action must be taken.

Under the NFL’s guidelines, the league would relocate any game if the air quality index in the city it’s being played exceeds 200 AQI. As of Friday morning, per the EPA, Seattle’s AQI stands at 163 and it has come extremely close to surpassing 200.

An AQI between 151-200 is considered unhealthy, especially for those with existing medical conditions that already put them at risk for medical issues. When the AQI exceeds 200, it’s considered very unhealthy and everyone is encouraged to stay inside.

NFL odds: Lines and points spreads for every game

There is precedent for the NFL stepping in and relocating a game due to fires. In 2003, the league relocated a San Diego Chargers-Miami Dolphins game due to Qualcomm Stadium’s parking lot being used as an evacuation site. However, the NFL hasn’t had to move a game specifically due to air conditions.

If need be, the NFL could relocate the game to Gillette Stadium. However, that likely won’t be necessary given the improving situation in Seattle. With rain expected over the next two days, the city’s air quality should be in much better standing by Sunday.

Once that issue is cleared, the Seahawks and Patriots can take the field for a thrilling game.