New York Yankees right-hander Corey Kluber was diagnosed with a sub-scapular strain in his right rotator cuff and is expected to be out for approximately eight weeks, manager Aaron Boone told reporters Wednesday.

Kluber underwent an MRI a day after leaving his Tuesday start against the Toronto Blue Jays after three innings due to tightness in his pitching shoulder. Boone said the veteran will not throw for the next four weeks before spending the following four weeks rebuilding his arm strength.

The injury occurred one start after the 35-year-old threw a no-hitter May 19 against the Texas Rangers. Per Boone, the team will also give Kluber a more intensive MRI to further check the severity of the injury.

The news put a halt to quite a revival season for the two-time Cy Young Award winner Kluber, who is 4-3 this season with a 3.04 ERA in 10 starts. That is already two more victories than he had in the previous two seasons combined. In contrast, he posted 18 or more wins in four out of five seasons with the Cleveland Indians from 2014-18. 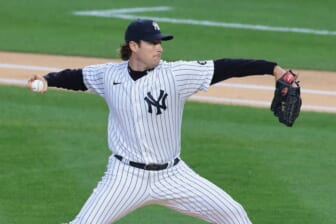 In addition, the team placed first baseman Luke Voit back on the 10-day injured list because of a grade 2 right oblique strain.

Voit, 30, had just been activated off the IL on May 11 after undergoing surgery after an MRI in late March revealed a partially torn meniscus in his right knee.

Voit has played in just 12 games this injury-plagued season, going 8-for-44 (.182) at the plate with one home run and three RBIs. He led the majors in home runs with 22 during the shortened 2020 season. That marked a career high for Voit, despite playing in just 56 games.

Boone also told reporters that the Yankees expect to activate Giancarlo Stanton (quad) from the IL on Friday.