Starting pitching has helped the New York Yankees shoot up in the standings after an early slump. Chances are, their revelatory pitching form is here to stay.

The New York Yankees got off to a trudging 6-11 start. Since the rough entry to the 2021 MLB season, they’ve hit their stride from all aspects of the game. The impetus for them winning 22 of their last 30 affairs? Starting pitching.

Manager Aaron Boone’s starting rotation was an enormous question mark going into this season given the amount of youth and fresh faces present. An alarming concern no more, as starting pitching has taken the Yankees’ operation to the next level this season.

Gerrit Cole has been his stellar self, pitching deep into games, logging strikeouts at a high rate and making effective use of his offerings. The right-hander owns a 1.81 ERA and an 0.80 WHIP across 10 starts.

Despite Cole’s heroics and Jameson Taillon’s bumpy start, the most impactful development on the Yankees’ pitching staff has been the respective play of Corey Kluber and Domingo German over the last month.

Kluber has pitched like his former Cy Young-self. He’s providing length, freezing hitters with his curveball and threw a no-hitter against the Texas Rangers on May 19. Kluber owns a 2.86 ERA across nine starts.

German went from being optioned due to performance to being a force to be reckoned with. The 28-year-old has surrendered a combined eight earned runs over his last six starts and is consistently getting the ball to the bullpen in the late innings.

Meanwhile, Jordan Montgomery has shown glimpses of being a sturdy force every fifth day. Last week he silenced the Chicago White Sox, tossing seven shutout innings. Taillon has struggled but is coming off throwing five scoreless innings against the White Sox in his last start.

The Yankees are winning with great starting pitching. 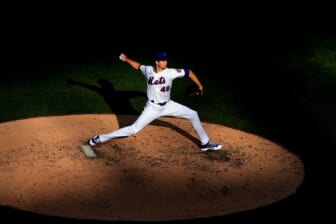 Yes, this is a unit that has struggled to come through in the postseason in recent memory given its power-happy tendencies. That said, it’s still a unit with a bevy of highly productive hitters in their prime. Aaron Judge, DJ LeMahieu, Gleyber Torres, Giancarlo Stanton and Gio Urshela all have considerable pop in their bats and have produced at a high level.

Now, the Yankees are dealing with some injuries around the diamond. Stanton is out, and Aaron Hicks’ season may be over. All the while, Luke Voit, Gary Sanchez, Brett Gardner and Rougned Odor have been spotty at the plate. At the end of the day, this offense has to garner more consistency, but it’s also capable of putting up six runs a night and is beginning to get into a groove.

Questions remain on the hitting front but none are different from seasons past. The difference? They’re being complemented by something new: an elite starting rotation. 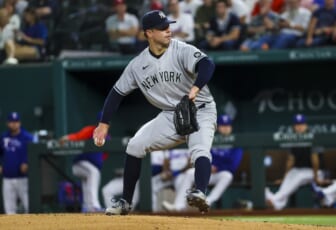 Holding the Commissioner’s Trophy in the fall is the endgame for the New York Yankees. Their starting rotation will at some point give up a run because, well, that’s the way it works. The premise of the team’s hot streak of late is them having the chance to steal games in the late innings. That’s entirely due to starting pitching.

Cole is the best pitcher in the American League. Veterans like Kluber and Montgomery have held down the fort and in Kluber’s case improved as the season has progressed. German looks to be picking up where he left off prior to 2020.

By the way, the Yankees have one of MLB’s best bullpens. Aroldis Chapman has surrendered one run. Jonathan Loaisiga and Luis Cessa have found niches in the late innings. Michael King has been superb out of long relief and could be utilized as a spot starter.

The Yankees are up against rigid competition in the AL East with the Boston Red Sox out to a surprisingly good start. Running parallel to the Yankees’ play of late has been the Tampa Bay Rays winning 11 consecutive games and the Toronto Blue Jays swinging the sticks well.

We’re merely one-third of the way throughout the 2021 MLB season. Extremes will be broken both ways (good and bad). If starting pitching continues to lead the way, the Yankees are as good and dangerous as any team in the AL; they have a new dimension to their ball club.