Led by front office head Leon Rose, the New York Knicks are expected to be among the most-active teams on the NBA trade front this summer.

New York is coming off a surprise playoff appearance and is set to have roughly $55 million to spend under the cap. During an off-season that will see most NBA teams cash-strapped, the Knicks are in a great position to add a star or two to their core group.

Interestingly enough, it appears that one member of said core group is off limits in any trade.

“People in touch with the Knicks recently came away with the impression that New York had little interest in including R.J. Barrett in any trades,” Ian Begley of SNY reported recently.

This was one of the pieces of information in a broader report from the New York Knicks insider indicating an interest in trading for Cleveland Cavaliers star Collin Sexton.

We previously detailed how a Sexton trade to the Knicks might look. Despite the 22-year-old Sexton averaging 24.3 points on a resounding 48% shooting last season, no hypothetical trade of the guard to New York would include Barrett. That wouldn’t even be a fair one-for-one swap.

Why are the New York Knicks so bullish on R.J. Barrett?

We know that Rose is going to be extremely aggressive this summer. It’s also not a secret that reigning NBA Coach of the Year Tom Thibodeau isn’t necessarily patient in team-building. So, why the push back in moving Barrett?

It makes a ton of sense. A former star with Duke, New York exhausted the No. 3 overall pick in the 2019 NBA Draft on the forward. That type of commitment makes it hard for its brass to simply move off the 21-year-old wing. It would take a lot more than someone of Sexton’s ilk to move the needle here, especially given how much Barrett has improved over his first two NBA seasons.

As you can see, Barrett improved leaps and bounds in pretty much every major statistical category. Just look at the youngster’s win shares from his rookie campaign to 2020-21.

What does this mean for the New York Knicks pursuit of Damian Lillard?

That’s the obvious backdrop here. Reports suggested earlier this summer that New York was going to be aggressive in attempting to acquire the star guard from the Portland Trail Blazers.

Whether Lillard is even on the trade block remains to be seen. What we do know is that New York will not be able to land the future Hall of Famer without giving up Barrett. That seems to be as clear as day.

A package surrounding Immanuel Quickley, Mitchell Robinson and Obi Toppin to go with multiple first-round picks is not going to get it done. It also seems highly unlikely that New York moves off reigning NBA Most Improved Player Julius Randle. 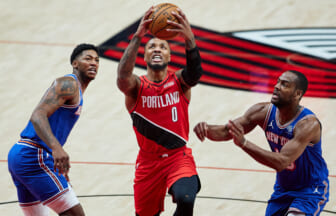 Of course, all of this could be smoke coming from the New York Knicks’ brass. It’s hard to fathom them actually withholding Barrett in trade talks for Lillard.

As for lesser players, New York has the young assets, draft picks and cap room to improve its roster without moving off Barrett. That might end up being its goal moving forward this summer.