The New York Jets benched Zach Wilson during their Thursday Night Football matchup against the Jacksonville Jaguars, turning the offense over to 27-year-old quarterback Chris Streveler.

Streveler, a 6-foot-1 quarterback, made brief NFL appearances for the Arizona Cardinals in 2020 and 2021. Outside of his five games played with Arizona, the Illinois native has achieved far more success in the Canadian Football League.

A 247 Sports’ three-star recruit in 2013, Streveler originally played for the Minnesota Golden Gophers. After three seasons, he transferred to the University of South Dakota and starred as the Coyotes’ quarterback from 2016-’17.

Streveler went undrafted in 2018 and an opportunity in the NFL never came. As a result, he signed with the CFL’s Winnipeg Blue Bombers in May 2018. Injuries opened the door for him to become a starter, leading to a memorable run in Winnipeg. 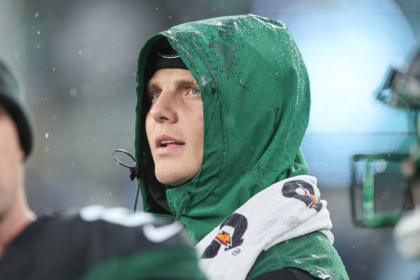 Streveler played in a quarterback rotation for the Blue Bombers during their 2019 playoff run, with the coaching staff relying on his rushing ability. The plan paid off as Streveler helped lead Winnipeg to a Grey Cup championship, its first in nearly three decades.

Related: Why the New York Jets must move on from Zach Wilson in 2023

The veteran quarterback signed a reserve/futures contract with the Cardinals in February 2020, later making his NFL debut on Sept. 13 against the San Francisco 49ers, rushing for 3 yards on one carry. Against the Los Angeles Rams on Jan. 3, 2021, Streveler completed 11-of-16 passes for 105 yards with one interception and his first NFL touchdown pass to Jonathan Ward.

Arizona waived Streveler in November 2021 and he quickly found a home with the Baltimore Ravens’ practice squad. In February 2022, Streveler signed with the Miami Dolphins but was waived three months later.

The Jets added Streveler to their roster for the preseason but ultimately cut ties with him before setting the 53-man roster. He later joined the team’s practice squad and they have activated him to the gameday roster multiple times this season.