A C.J. Mosley trade from the New York Jets could be on the horizon 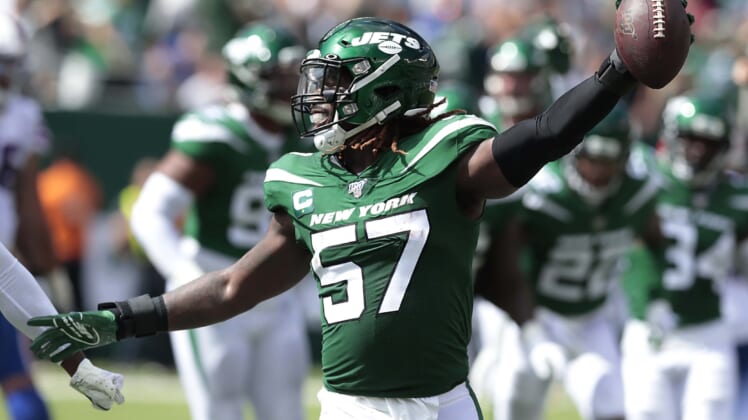 The New York Jets have seen a pretty major overhaul on defense through the first week of NFL free agency. That could now include trading linebacker C.J. Mosley.

What does this mean for C.J. Mosley and his future in New York? Well, reports indicate that the Jets are looking to trade the four-time Pro Bowl performer.

“The addition of linebacker Jarrad Davis has fueled speculation about Mosley, whose roster spot appears shaky,” ESPN’s Rich Cimini reported recently. “Yes, the Jets are open to trading him, a source said, but that will be difficult because he’s owed $14 million in guarantees over the next two seasons.”

As noted, the guarantees remaining on Mosley’s contract makes it hard for the Jets to pull off a trade. As of right now, only 10 teams have north of $20 million to spend against the 2021 NFL salary cap. Now that we’re officially in the second wave of free agency, it’s going to be hard to entice a team in picking up Mosley’s contract.

C.J. Mosley has been a bust with the New York Jets

There’s another backdrop to this. A four-time Pro Bowler during his five-year career with the Baltimore Ravens, Mosley signed a five-year, $85 million contract with the Jets back in March of 2019.

To say that it has not gone swimmingly would be an understatement. Mosley appeared in just two games his first season with the Jets, suffering through a lingering groin injury in the process. He also opted out of the 2020 season due to the COVID-19 pandemic.

Prior to that, the former Alabama standout was among the best middle linebackers in the game during his time with the Ravens. That included three consecutive Pro Bowl appearances from 2016-18, a span that saw him record a combined 339 tackles (22 for loss), 11 quarterback hits, seven interceptions and four forced fumbles.

Barring a trade, the Jets would take a $27.5 million dead cap hit by releasing C.J. Mosley. However, the team could designate him a post-June 1 cut while only taking an $8 million dead cap hit. Despite how hard they have hit free agency, the Jets still have north of $35 million to spend under the NFL salary cap.