New York Giants testing all personnel for COVID-19 amid scare

Nov 8, 2020; Landover, Maryland, USA; A view of the helmet of New York Giants kicker Graham Gano (not pictured) next to a ball on the sidelines against the Washington Football Team at FedExField. Mandatory Credit: Geoff Burke-USA TODAY Sports

The New York Giants were testing all personnel for COVID-19 on Wednesday after running backs coach Burton Burns tested positive.

The New York Post reported there was a long line outside the team testing trailer that consisted of players, coaches, front office staff and even the Giants’ co-owners. Both vaccinated and unvaccinated personnel were being tested.

Burns was one of 13 members of the organization to test positive Tuesday, and upon a retest, all but Burns came back negative. Still, coach Joe Judge said several Giants players, whom he did not name, would miss practice Wednesday for COVID-19 protocols.

Speaking to reporters spread out in the parking lot of the team facility, Judge told reporters that Burns was apologetic for the positive test but that he didn’t need to be. He said Burns doesn’t go anywhere but to work and home. 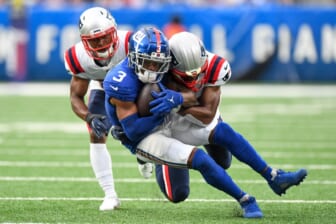 “You don’t have to go somewhere to catch it,” Judge said. “It’ll come to you.”

Burns will miss the game against the Raiders. Freddie Kitchens and Jody Wright will coach the running backs in his absence.