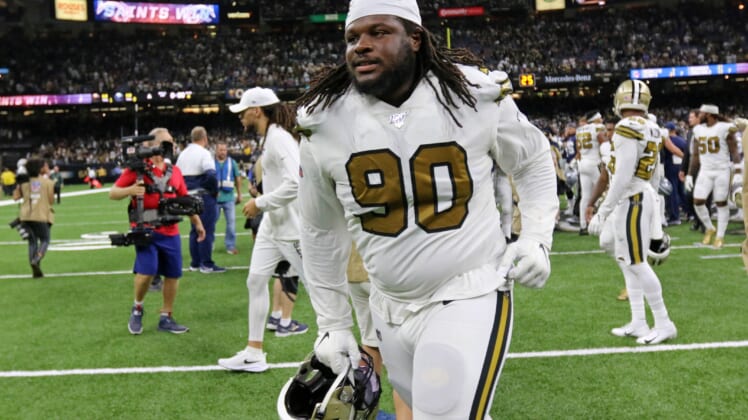 The New Orleans Saints have the worst salary cap situation in the NFL, which reportedly means defensive lineman Malcom Brown may be on his way out of town in a trade.

As the Saints continue making maneuvers to work their way under the league’s cap, Brown would save them enough money in 2021 that it’d make sense to move him.

NFL Network insider Ian Rapoport reported on Brown potentially being on the trade block, adding that he could also be a cap casualty:

Unfortunately for New Orleans, when things like this are reported and a player has the same cap consequences whether they’re traded or released, that tends to sink any value they’d have as far as returning compensation in a swap.

Rapoport followed up by reporting that the Saints restructured defensive lineman David Onyemata’s contract to save $4.34 million against the cap, but also re-signed core special teams player JT Gray to a two-year, $4 million deal with $2 million guaranteed.

As far as the Brown situation is concerned, he’d definitely have some suitors interested in him. The former first-round pick of the New England Patriots has made 29 regular-season starts in his first two seasons with New Orleans, amassing 61 combined tackles, nine tackles for loss and three sacks in that span.

While the production doesn’t pop off the screen, Brown is a load to handle in the trenches at 6-foot-2, 320 pounds. He’s been a consistent, serviceable starter throughout his career and had Pro Football Focus’ 17th-best run defense grade among interior defenders in 2020.

Some difficult decisions must be made by Saints general manager Mickey Loomis and the team’s personnel group. At least when it comes to the defensive line, saving the $5 million by parting ways with Brown is the right move, as opposed to trying to swing a better trade for someone like Onyemata.

The reality is Onyemata is one of the more underrated interior defenders in all of football. PFF ranked him in seventh last season — just behind big names like Vita Vea, DeForest Buckner and Cameron Heyward. That’s the caliber of player Onyemata was on a down-to-down basis for New Orleans in 2020.

Brown has been solid, but has never demonstrated that type of ceiling as a pro. Oft-injured Sheldon Rankins could be a candidate to step in next season and make a massive comeback. If he returns and plays to his 2018 form when he logged eight sacks, Rankins will be a bargain against the cap.

Onyemata was generous to restructure his current deal, but the good news is he’ll get handsomely rewarded as he embarks on a contract year in search of an even higher payday during the 2022 campaign.

It’ll take many more like-minded Saints players to ensure the team stays competitive this coming year. Cornerback Janoris Jenkins comes to mind as someone who can rework his contract to save New Orleans lots of cap. The same goes for six-time Pro Bowl defensive end Cameron Jordan.

Taking into account Brown’s departure, Onyemata’s restructure and Gray re-signing, and using Over the Cap’s default restructuring for Jenkins and Jordan, those moves would still leave the Saints over $47 million in the salary cap red.

Here are the following other moves New Orleans would have to make — and don’t rule out trades for some of these players to further alleviate the cap burden: restructures for left tackle Terron Armstead, guard Andrus Peat superstar receiver Michael Thomas, All-Pro linebacker Demario Davis and safety Malcolm Jenkins. Then, cut linebacker Kwon Alexander and trade or release cornerback Marshon Lattimore.

All that leaves the Saints with a little over $3.7 million in cap room. Oh, but safety Marcus Williams is a free agent, as is possible starting quarterback Jameis Winston. Might want to re-sign them.

Yep, it’s pretty much a nightmare for New Orleans to figure out its roster situation, and it’ll take a valiant effort for the Saints to defend their NFC South title against the reigning Super Bowl champion Tampa Bay Buccaneers.

Keep an eye out for more Saints rumors leading up to free agency and the draft, as they’re sure to be in the market for some wild transactions.