The New Orleans Pelicans are doing everything possible to surround star forward Zion Williamson with proven veterans as a way to improve off last season’s struggles.

Despite this, there’s still some major questions for front office head David Griffin and Co. That could potentially be answered in the form of Buddy Hield.

According to Jake Fischer of Bleacher Report, the New Orleans Pelicans had engaged in trade talks with the Sacramento Kings ahead of the 2021 NBA Draft. That included Josh Hart potentially heading to Sacramento in a sign-and-trade for Hield.

“New Orleans and Sacramento were said to be discussing a Buddy Hield-for-Josh Hart sign-and-trade baked into the Pelicans’ draft-week deal with Memphis, although it’s unclear if that dynamic remains plausible as Hart is still unsigned,” Fischer reported.

Would Buddy Hield be a fit for the New Orleans Pelicans?

Selected by the Pelicans No. 6 overall back in 2016, Hield spent the first half of his rookie season in New Orleans before being shipped off to California’s capital city in the DeMarcus Cousins blockbuster trade.

The former Oklahoma standout is a career 41% three-point shooter. He’s also averaging 18.9 points on 40% shooting from distance over the past three seasons.

In reality, Hield would be the third scoring option behind Williamson and Brandon Ingram in New Orleans. He’d also work well with another high-scoring guard in the recently-acquired Devonte’ Graham in the backcourt.

This would represent a tremendous core four with Jonas Valanciunas manning the five. 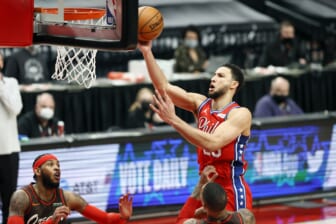 Boasting roughly $20 million in cap room, the New Orleans Pelicans would be able to take on Hield’s $22.4 million salary while sending Hart and other assets back to Sacramento.

As for Hart’s fit with the Kings, it would be questionable. They just selected fellow guard Davion Mitchell in the first round of the 2021 NBA Draft to go with holdovers Tyrese Haliburton and De’Aaron Fox already in the backcourt.

With that said, Sacramento has had a hard time finding a trade partner for Hield since talks with the Los Angeles Lakers fell through. As of right now, Hart might be the best option they can hope for.