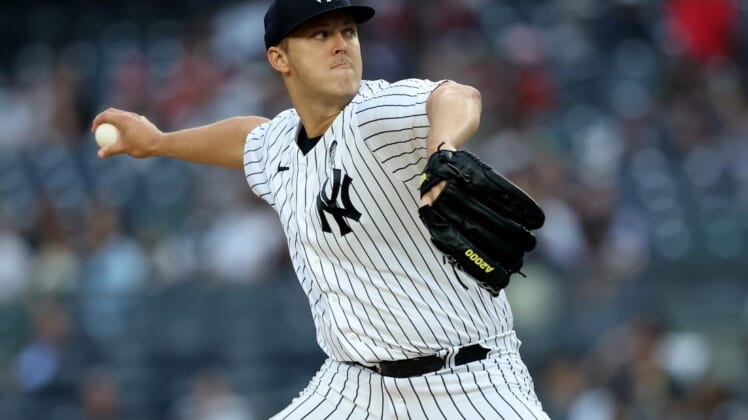 Taillon (6-1) lost his bid for the 24th perfect game in baseball history when Walsh hit an 0-2 curveball up the middle. The ball deflected off shortstop Isiah Kiner-Falefa’s glove to left fielder Miguel Andujar.

Taillon was bidding for the first perfect game since Felix Hernandez did it against Baltimore on Aug. 15, 2012, in Seattle. The last perfect game by a Yankee was July 18, 1999, by David Cone, who was doing analysis in the YES Network booth Thursday.

It was the second time a Yankee took a no-hitter into the eighth this season. On May 9, Nestor Cortes came within five outs against the Texas Rangers in a 1-0 game where Rizzo drove in the game’s only run.

On Thursday, Taillon allowed one run on two hits in eight innings. He struck out five, walked none and threw 64 of 101 pitches for strikes.

After ending Taillon’s bid for history, Walsh advanced to third on a groundout by Brandon Marsh. Walsh then scored the game’s first run when Kurt Suzuki singled to left.

The Yankees came right back in the bottom half against Oliver Ortega (1-2) and Archie Bradley.

Andujar started the rally with a double and took third when Ortega threw Ball 4 to Kiner-Falefa to the backstop. Following a walk to Aaron Hicks, Bradley struck out Joey Gallo, but Rizzo gave the Yankees a 2-1 lead when he grounded a 1-2 fastball up the middle.

Ohtani nearly ended the bid in the seventh when he hit a ground ball up the middle. Kiner-Falefa ranged to his left and got the out when first baseman DJ LeMahieu scooped the throw out of the dirt.

Taillon’s flirtation with history and Rizzo’s clutch hit gave the Yankees their seventh win in nine games since their only three-game losing streak this season, May 22-23.

Clay Holmes loaded the bases with two outs before getting his seventh save as the Yankees completed the doubleheader sweep after recording a 6-1 victory in the first game.