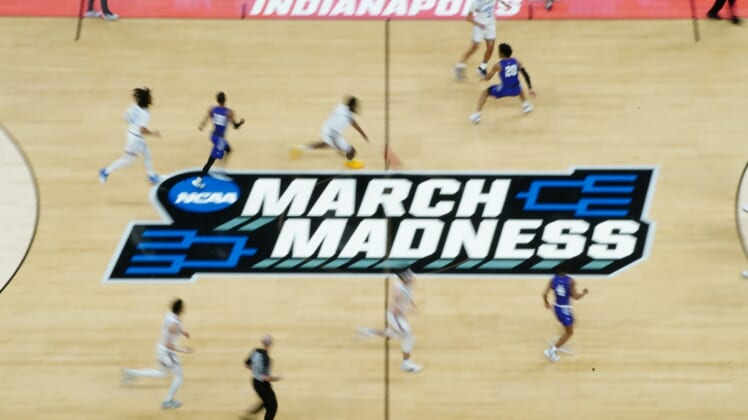 Mar 22, 2021; Indianapolis, Indiana, USA; General view of the March madness logo during the game between the UCLA Bruins and the Abilene Christian Wildcats in the second round of the 2021 NCAA Tournament at Bankers Life Fieldhouse. Mandatory Credit: Kirby Lee-USA TODAY Sports

The NCAA unanimously approved a rule that will allow student-athletes in all sports to be eligible immediately after their first transfer, The Athletic reported Wednesday.

In February, the NCAA revealed provisions for the new rule. Approval for all first-time transfers from four-year schools would be allowed provided they receive a transfer release from their previous school, leave their previous school academically eligible, maintain their academic progress at the new school and leave under no disciplinary suspension.

Previously, a player who transferred would have to sit out a year before participating in football, men’s and women’s basketball, baseball and men’s ice hockey, unless that player received a waiver from the NCAA.

Transferring between schools among student athletes was rampant even before the rule. There are currently more than 1,400 Division I men’s basketball players in the transfer portal.

The new transfer criteria is expected to be in place for the 2020-21 school year.

“The current system is unsustainable. Working group members believe it’s time to bring our transfer rules more in line with today’s college landscape,” working group chair Jon Steinbrecher, commissioner of the Mid-American Conference, said in a February news release. “This concept provides a uniform approach that is understandable, predictable and objective. Most importantly, it benefits students. …

“More than a third of all college students transfer at least once, and the Division I rule prohibiting immediate competition for students who play five sports hasn’t discouraged them from transferring. This dynamic has strained the waiver process, which was designed to handle extenuating and extraordinary circumstances.”

Players wishing to be eligible for fall/winter sports of the following school year would have to enter the transfer portal by May 1. For spring sports athletes, there would be a July 1 deadline to enter the portal.

The new rule is not expected to become official until the NCAA Division Council wraps up its meeting Thursday.